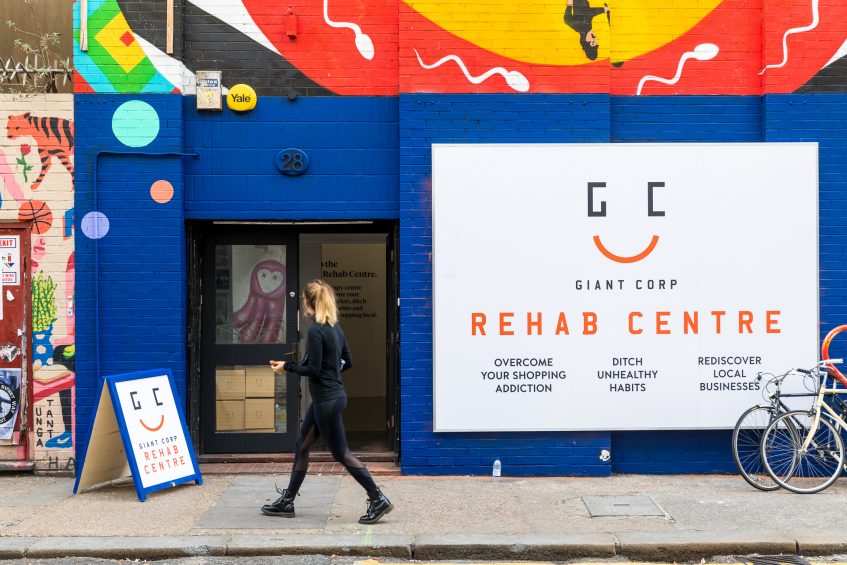 The Emperor’s New Clothes Scale (ENC) is my personal scaled scoring system for how pretentious a brand experience is. Sampling a microwave burger by Rustlers in Tesco Extra in Swindon, would be a low 1 on this scale. Someone smiles and hands you a taste of microwaved meat in a bun and thereafter the experience is purely one of physical mastication. This activity won our FM award this year for retail experiences for agency Link Communication. This highly accountable act will be as hard for others to follow whilst proving easy for shoppers to swallow. It won’t be winning any awards for outstanding creativity, but no need, it romped home in terms of the delivery of brand objectives and sold lorryloads of burgers. 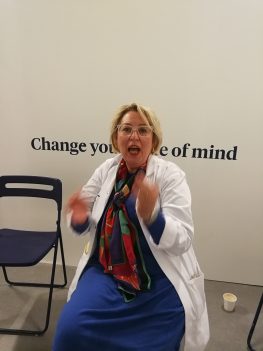 Tiptoeing down to Shoreditch (the location Shore+Ditch is beguilingly real and earthy isn’t it), Cow PR and iZettle’s Giant Corp Rehab Centre set off all the ENC top score bells a-ringing. A Rehab pop-up? Really? Was I about to be sucked into a meaningless trendy void so empty and naked as to leave all awkward participants blushing?

On my journey to Old Street and thence to the Redchurch Street location I read about the premise: “The Giant Corp Rehab Centre, the world’s first centre dedicated to helping people ditch their addictions to compulsive big brand online shopping, is opening in London. The centre comprises of a number of treatment sessions – from group, to shock and box therapy – which help guide guests into kicking their unhealthy shopping habits.”

So far, so worrying. But then the description continued: “The Giant Corp Rehab Centre, opened by fintech company iZettle, helps people to recognise their addiction to so-called ‘one click buying’ and encourages them to ditch the giant retailers in favour of rediscovering independent businesses and supporting the local economy.”

So, the first paragraph hints at a fully blown 10 on the ENC scale, but the second balances that with a hint at something rather beautiful and real – lets teach the East of City fashionistas a thing or two about spending less money online and supporting local trade. If Rustler’s is a 1 out of 10, then this serious ‘shop locally’ message is somewhere around an unpretentious 3.

A few tentative steps later and I was there, knocking at the door of the Centre and welcomed by a Cow PR team wearing lab coats. They took a look at me, and then to my surprise and delight, let me in as if I belonged there quite naturally. Perhaps I would fit right in?

First impressions – this pop-up centre was quite sparsely decorated, and the event had played with this bare look with clean black on white messaging that helped direct visitors through various experience cells. I didn’t traipse into all of them, but I started with a nice view of some art that was illustrating the soulless online shopping experience,

Next, I was guided to a psychological analyst, Sally Baker, who talked me through my own online shopping ‘addiction’. I’m not, in truth, much of an online shopper at all, but I certainly did enjoy the very engaging charisma of this analyst and following her lead I visualised the stomach-knotted location of my anxiety, and so I did take my chance to reflect on the time that I routinely waste procrastinating via social media. So far, so good. I then bypassed a chance to bash up some delivery boxes before emerging into the heart of this experience, where basic bouquet floristry skills and barista art were being taught. 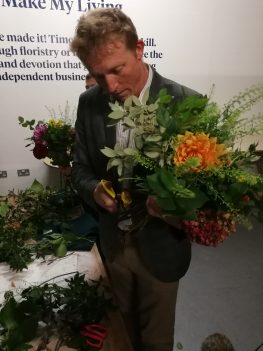 And all of a sudden, I was ‘in’, fully immersed in both the event, the shared experience with my fellow florists and baristas and the whole small trader reality check. Cow PR had selected such excellent instructors from such deft and bright small local businesses that every minute spent with these engaging entrepreneurs was a worthwhile one. The pretentiousness barometer, pushing 5 or 6 during the art exhibition had swung back to below a 3 again.

That, I think, showed very great skill. I fully accept that you have to have something going on at an experiential event that drives the PR and certainly the tie in to shopper addiction and the psychological slant did that. But as a visitor I was left to go home with a resounding message that strikes at the core of what I now hold the iZettle brand to stand for. This company, with its easy pay cards system for traders is doing a lot right in gaining a purchase in the minds of self-employed small retailers and if events like the Rehab Centre help the brand to add depth to its definition then it is something that I, and certainly others, will feel comfortable buying into.

I expect that this experience got the very best out of Shoreditch because the location doubled as an easy find for the media types who live in the locale, whist flourishing a local trade hand’s on experience that would resonate in any high street.

This event truly focussed on a heady (and inside heady) sensations overload. The simple but seductive scents of flowers and coffee, the foliage green colour bouncing off the cold black and while lab-style staging, the clear but unpushy messaging, and above all the pitch perfect learning experience made the Rehab Centre a genuine triumph.

The Giant Corp Rehab Centre was a two-day pop-up, Friday 12th and Saturday 13th October 2018. iZettle, set up by Swedish entrepreneurs, is a great transactional support tool for small businesses, and a very welcome investor in brand experience marketing. Parent company PayPal, acquired iZettle this year, in an offline transaction for £1.6bn. The event was devised and hosted by Cow PR. Tandem Set and Scenery helped create and build the event space.

Whilst we are at it – a word on Poutineries

Several years ago, I managed to go to Canada and miss out on Poutine completely, so I was a little astonished to find it being evoked (accurately according to Wikipedia) as the national dish of Canada, in Spitalfields, by J Walter Thompson, in the shape of a pop-up Poutinerie for Air Canada. The cheese, chips and gravy Canadian dining staple was given different destination-based twists, shaping a menu to suit the locations you can fly to on the airline. 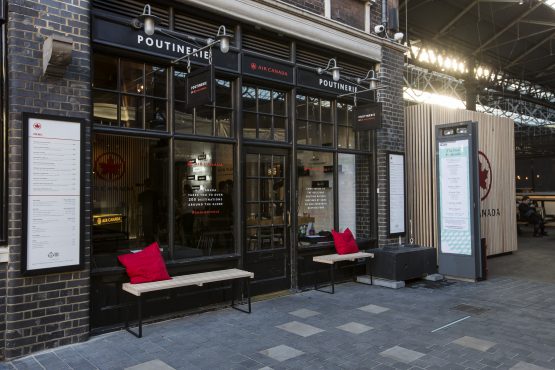 I didn’t get there in the end (the Poutinerie closed for the day ahead of my hunger) though this does come across as quite a cool everyman experience that just happens to be in Spitalfields and seems very friendly and lovable.

I do love media reach stats though! Almost all immersive events have to have extraordinary ‘reach’ stats to brag about, (and I do understand that bloaty big numbers rule for marketing and advertising generally, not just experiential events) but the huge numbers involved do seem a bit unfathomable. I mean, with 47 million reach surely everyone should be talking about Poutine, when it seems to be Brexit or Trump instead? As the Canadians might very well say, go figure! 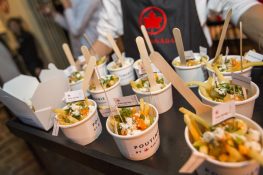 Congratulations are certainly due to Air Canada and J Walter Thompson for bringing this airline to life via Poutine for a second year and being good enough for many to hail the return as both welcome and rewarding. That is what really counts here.

So, my ENC score for the Poutinerie is admittedly a bit of a guess, as I didn’t go (DNA), but I’m saying the cheese chips and gravy is deeply unpretentious, and would be real and flavoursome. The event reviewed really well.  And the connection to Canada is strong. I’m not so keen on stretching the culinary metaphor to onward flight destinations nor the nagging sensation in the back of my mind that more people should be talking about this than the Supreme Court shoo-in that was taking place at the time. So, I’m hedging my bets with an unqualified ENC of 5.