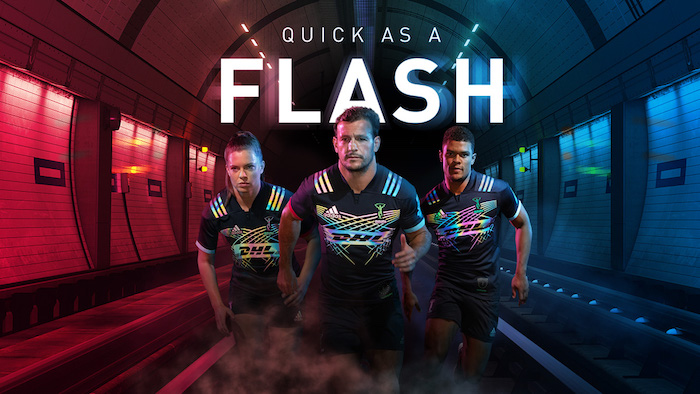 Every year, Harlequins Rugby hold a Big Game charity match at Twickenham Stadium and release a limited-edition rugby shirt to be worn by the players on the day. With the 18/19 edition featuring innovative Flash Technology from Adidas, Harlequin FC enlisted RedHotPenny to unleash the full potential of the exclusive design and meet their retail targets.

Harlequins wanted to get fans excited about the charity shirt and raise awareness for their Big Game 11 Charity Match.

The design was inspired by Harlequins’ London roots.  It features industry-first Flash Technology which lights up when exposed to the flash of a camera.

However the shirt would only be worn by players for one match, unlike in previous years when the charity shirt was worn for international matches, so the pressure was on to maximise the product’s lifespan.

Red hot penny provided advisory and co-ordinated Harlequins’ retail and marketing activity  for an integrated approach to the campaign.

RedHotPenny attended an initial photo shoot with players to ensure the assets produced would be suitable for traditional marketing and online activity.

Glimpses of the promo video were used in a 1-week teaser campaign across social platforms including YouTube, to build anticipation for the shirt. The team also helped set-up a custom landing page to showcase the technology.

During  matches  leading  up to the charity game, RedHotPenny supported offline marketing efforts – specifically Harlequins’ stadium activation event. This gave fans the chance to get a branded picture with Harlequins players and mascots in the “Quick as a Flash” photobooth.

The charity shirt sold out through a combination of online and in-store purchases.

Finally, Big Game 11 was a sell–out and saw 80,000 people attend  Twickenham  Stadium  where the team played in their Flash Technology rugby shirts.