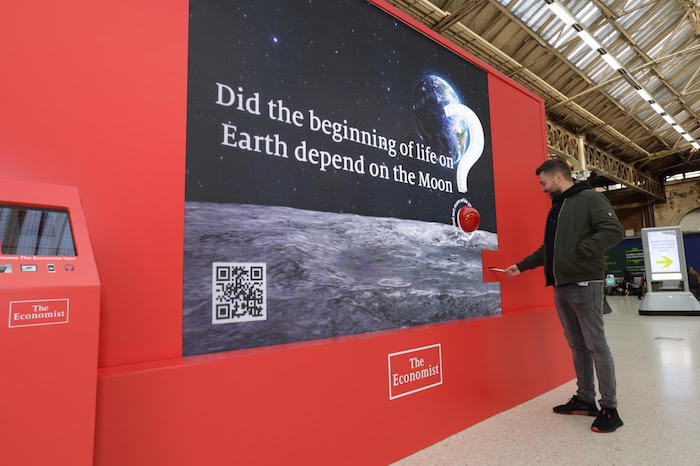 The interactive experience provides commuters with answers to the questions posed in The Economist’s ‘Never Stop Questioning’ TV ads
The Economist, a leading source of analysis on international business and world affairs recently expanded on its new ‘’Never Stop Questioning’ TV commercials with a companion experiential activation at London Victoria train station.
The experience continued the guiding thought of The Economist’s new TV ads – the value of always questioning the world around us – by displaying the thought-provoking questions featured in the direct response commercial on a large interactive screen within the station. The questions are based on articles from The Economist, including ‘Does social media help or harm democracy?’ and ‘Are plastic bags better for the ocean than paper ones?’
As each question was displayed, passers-by were encouraged to interact with a button on the screen to find out the answer. When pressed, the button triggered the screen’s integrated printer to release a preview of the corresponding article. QR codes on both the print out and screen took users to the full article on Economist.com, where non-subscribers could also register for free access.
“At The Economist, we have always believed it is by posing and debating difficult questions that society progresses and moves forward. This experience brings to life the idea that we survive and thrive by asking why,” said Mark Cripps, Chief Marketing Officer at The Economist. “By consuming our content, readers will be better armed with the tools they need to prepare themselves for the future.”
The experience was conceived and brought to life by brand experience agency Sense London.
Share: