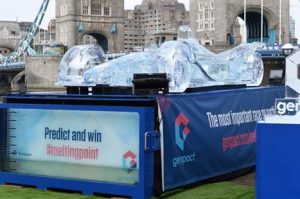 Genpact, a global professional services firm focused on delivering digital transformation, is inviting the world to help fight climate change in a 24 hour fundraising campaign, ‘Melting Point,’ which draws attention to the perils of our warming planet.

Ahead of this weekend’s Formula E London E-Prix, Genpact’s ‘Melting Point’ campaign sees a sustainably sourced three-tonne ice replica of an Envision Virgin Racing Formula E car installed by Tower Bridge in Potters Field Park, with people invited to predict the percentage of total ice melt as it is exposed to the elements for 24 hours.

The ice replica is made using recycled rainwater, and for every entry, Genpact will donate $1 to the Arctic Ice Project, a non-profit organisation that aims to slow climate change by restoring ice in the Arctic, in a bid to raise a total of $10,000.

To bring awareness to the critical issue of climate change and leverage the same AI-powered algorithms that have helped Envision Virgin Racing predict the number of laps in a race, Genpact will forecast the percentage of the ice car that will melt over this period and provide real-time updates on temperature, wind speed, rainfall, and local footfall.

The event is certified as carbon neutral by the non-profit organisation A Greener Festival, which is dedicated to improving the sustainability of events, venues, and festivals, and will see all ice and water used in the competition recycled into future ice sculptures created by the artists at Hamilton Ice Sculptors.

Genpact’s digital technology has also helped Envision Virgin Racing maintain the team’s status of being the first carbon-neutral Formula E team, making it the greenest team on the greenest grid.

Stacy Simpson, Chief Marketing Officer, Genpact says: “Genpact’s Melting Point brings attention to the critical issue of climate change, highlighting how digital technology and data analytics can and must help solve some of the world’s biggest and most complex challenges. Melting Point’s 24-hour challenge also helps put Formula E fans in the driver’s seat in the race against climate change, allowing them to work alongside our predictive analytics engines, with their contribution going directly to help support the Arctic Project’s efforts to protect our planet.”

“It’s an honour to partner with Genpact on Melting Point, which will raise awareness of the detrimental impact of climate change,” said Tom Light, Executive Director of the Arctic Ice Project. “Our mission is to slowdown the pace of climate change and buy time for our planet to transition away from a carbon economy to more sustainable way of life. The health of the Arctic is vital to preserving the Earth’s environment.”

The campaign launches ahead of this weekend’s doubleheader races and the 2021 United Nations Climate Change Conference, also known as COP26. The competition opens at 17:00 BST July 21, 2021 and can be followed on social media using the hashtag #MeltingPoint. In addition to the donation, participants will have a chance to win grandstand tickets to a 2022 FIA Formula E World Championship race.

For more information on this partnership or to participate, visit www.genpact.com/meltingpoint