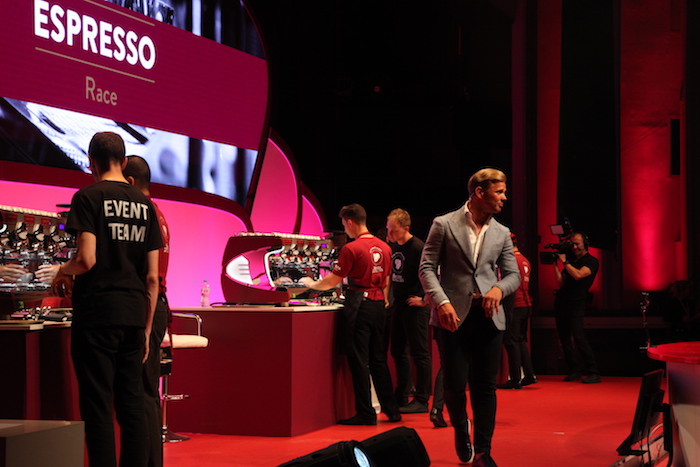 Multinational coffeehouse Costa Coffee crowned, Brian Chibwe, their Barista of the Year winner at the final of their annual Champion of Champions competition at Troxy on 18th July 2019.

The 22-year-old, who has been working for Costa Coffee in the UAE for two and a half years took the top spot, closely followed by UK barista, Ruggero Barlaba, from Guildford. Third place went to Nestor L. Allado JR., also from the UAE.

The prestigious competition saw 12 of Costa Coffee’s best baristas battle it out to win first place as Costa Coffee’s Champion of Champions. With over 30,000 baristas working globally for the brand, the final 12 battled it over a six-month event to secure a place at the final showdown in London.

Now in its thirteenth year, the competition showcased the technical skill and creativity of the very talented Costa Coffee baristas all over the world. Having already battled it out against hundreds of other contestants over several rounds to reach the global finals, the finalists then took part in a series of challenges over two days – designed to find the best barista the world has to offer.

Challenges included technical tests and an espresso race, where baristas were tasked with making as many espressos as possible in under two minutes while still retaining a premium quality. The 12 finalists were also required to showcase their creativity by inventing and preparing their own ‘signature drink’ while maintaining Costa Coffee’s standard for the premium quality that goes into every handcrafted drink.

The final, which took place at Troxy in London on 18th July, was judged by an esteemed panel of judges including Bake Off star Selasi Gbormittah, Costa Coffee’s Master of Coffee Gennaro Pelliccia and Deb Caldow, Global Head of Coffee Innovation.

After a fierce competition, 22 year old Brian Chibwe was crowned Costa Coffee’s Barista of the Year 2019. The judges were blown away by his incredible skill, flare and knowledge. Originally from Zimbabwe, Brian was inspired by his desire to share his culture and appreciation for the local coffee growing communities to create a very special signature drink, called the Afro-Tango, which wowed the panel of experts.

The event also saw the culmination of Costa Coffee’s Latte Art competition. The three finalists made their designs live in the ground floor bar and the audience voted live for their favourite.

Working with communications agency Top Banana and Troxy, Costa Coffee transformed the stunning Grade II listed art deco venue with sleek branding throughout. Competitors got to see their name in lights as the Troxy facade was decorated with posters of all 12 finalists and their names. Signage throughout the building was changed to Costa Coffee branding and even the pillars in the art deco foyer featured stylish wraparounds. A miniature version of the interior of a Costa Coffee shop was installed in the downstairs bar for guests to relax in.

Costa Coffee vending machines were installed in the venue should guests need a pick me up at any point. Coffee machines manned by baristas were also placed in the downstairs bar area where the audience could enjoy classic coffees during the two intervals and sample some of Costa Coffee’s brand new menu products including baked treats and nitro cold brew Green and Blacks drinking chocolate. Payne and Gunter supplied a buffet lunch preceding the event along with delicious canapes during the interval. A drinks service of bubbly and soft drinks provided by Troxy completed the lineup of tasty offerings.

PSP AV provided all the staging, set and LED and ran the show.The stage featured three coffee machines for the finalists to use in the live challenges with a Costa Coffee branded backdrop and AV screen for announcements and live streaming throughout the event so guests could get a closer look at the action. The displays throughout the venue were also used to share live social during the contest. The entire event was live streamed on the internet so that fans and friends of the competitors all over the world didn’t have to miss a moment of the proceedings.

Ceri Cannon, Costa Coffee Barista of the Year Event Organiser said: “As soon as we saw Troxy, it ticked all of the boxes for our Barista of the Year live final. As well as being a beautiful space, the backstage area worked extremely well for us, plus there were fantastic opportunities to brand the venue and make our finalists feel like superstars. The team were also so helpful, friendly and accommodating.”