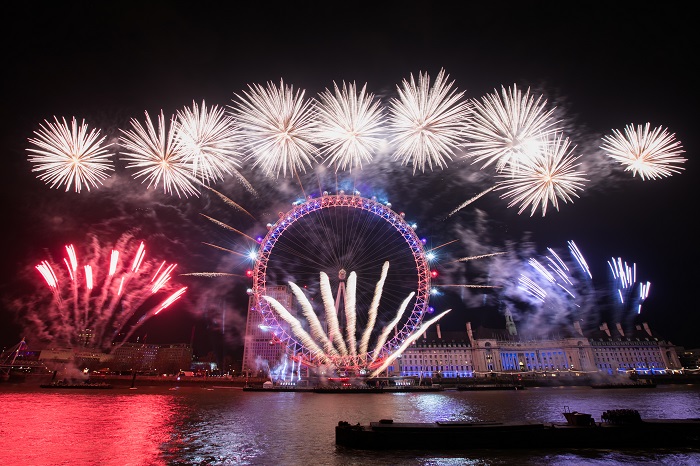 The display, which took place over the River Thames and the Coca-Cola London Eye, is a global showcase for the city, reflecting its dynamism, creativity and openness.  The event was seen by millions of people on BBC One and live by 110,000 people in viewing areas on the banks of the River Thames.

For the first time this year, online viewers also had the chance to see the internationally-renowned display live in 360o via the BBC.  The viewer experience was enhanced with a full panorama of the pyrotechnic and lighting display in the most extensive live 360o coverage the BBC has ever given such an event, offering people at home the opportunity to take control of the camera angle and feel like they are at the display itself.

The Mayor of London, Sadiq Khan, said: “London’s New Year’s Eve fireworks went off with a bang in the true sense of the word, with more than 100,000 people enjoying the dazzling display by the River Thames, and millions more tuning in at home to watch the BBC’s first ever 360 degree panoramic broadcast. Thanks to the hard work of the Met, TfL, the emergency services and all the partners involved, we celebrated safely, and in style. People came from all over the world to kick off the New Year in our great city and our world-renowned fireworks display was broadcast around the globe, delivering the message, once more, that London is open to all.”

The 12 minute show was set to an eclectic soundtrack comprised of a mix of music tracks and soundbites reflective of the city. Synchronised and triggered by GPS to Big Ben’s Chimes, the display involved 12,000 fireworks producing 50,000 projectiles.

Jim Donald, director of production, Jack Morton Worldwide said:  “The Mayor of London’s New Year’s Eve fireworks has become an iconic and globally recognised event, reflecting our unique and wonderfully vibrant city. It makes us enormously proud to be working with the hugely talented team that makes this possible.”

As well as working closely with Greater London Authority, Jack Morton Worldwide worked in conjunction with multiple organisations across the capital to deliver the event. These included: the Metropolitan Police, Westminster City Council, The City of London Corporation, Lambeth and Southwark Borough Councils, Transport for London, The Port of London Authority, London Ambulance Service and The London Fire Brigade.