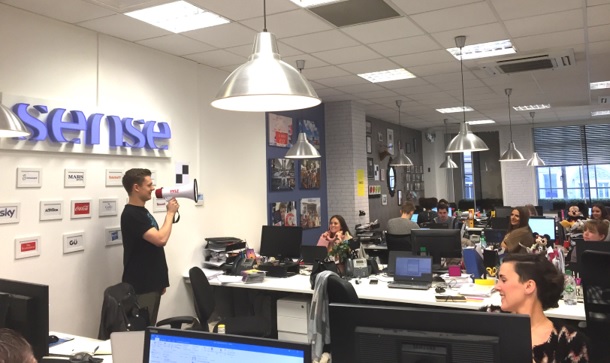 Sense has introduced an email amnesty during February 2017 to reduce the volume of internal emails sent between its team members with the aim of improving performance and creating a better working environment through more direct collaboration. Plus each percentage drop in the number of internal emails triggers a donation to the charity Mind.

“We’re a face-to-face discipline and we want to get people up and about talking to each other,” said Lou Garrod, deputy managing director at Sense. “We’re hoping this will promote a more collaborative way of working and show how the personal touch is important.”

The agency has worked out that 18,620 internal emails were sent in the month of February 2016. That’s around one per person every 10 mins – and 10% of them where asking someone else in their immediate vicinity to do something for them. The target is to reduce this volume by at least 30% during February 2017.

“If we can achieve this we’ll also be letting our money do the talking, because each percentage we shave off will unlock a donation to Mind,” added Garrod.

Sense is helping its team reach this target – and adding a sense of fun – with alternative methods of communication, including a loud hailer, chalkboards and desk sidecars or ‘buddy stools’. ‘Big Hand’ well done awards will also be placed on desks instead of the token thanks/well done emails.

“There are also pedometers on hand if people want to see what effect it’s had on their wellbeing,” said Garrod. “This aligns with the health and wellbeing initiative we launched recently for every team member at Sense to invest in a ‘healthy’ item, such as a fitbit, sporting event challenge or mindfulness course.”

The Sense IT team will be delivering weekly tallies to keep the team on track – posted on the notice board, of course, rather than sent through email.