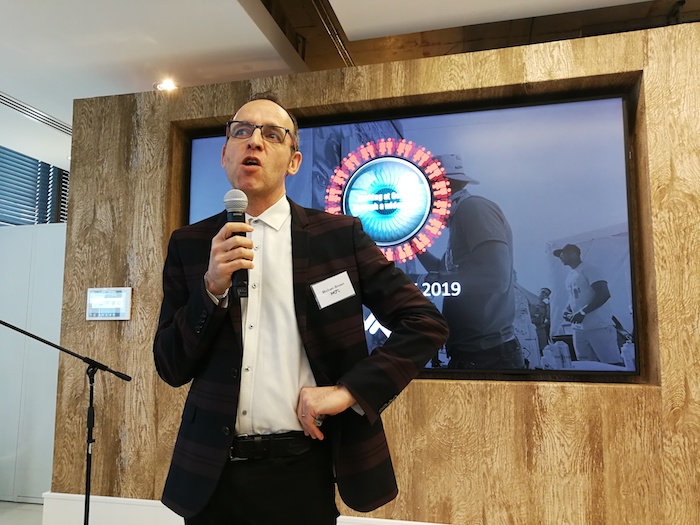 On Thursday 7thFebruary Frank Wainwright went to MKTG’s London offices to hear speakers at “Looking at Gender Through a Wider Lens”. This is not a review of the event but a response piece stimulated by this interesting debate.

Brands that embrace culture stay head of the crowd and maintain an emotional edge. This piece of knowledge alone made the recent “Looking at Gender Through a Wider Lens” event hosted by MKTG a must, especially when coupled with a line-up of speakers that comprised seniors Grainne Wafer and Peter Heneghan from Diageo and Ladbible respectively alongside Emma Cusdin, from gender marketing think tank Global Butterflies and Ben Norris, an actor and playwright made all the more relevant for this occasion by his performance in a Gillette commercial.

The discussion was genuinely thought provoking at this event. The morning’s proceedings flew by, and this is my attempt to get my thoughts down after being provoked by the panel.

Let’s get one thing straight first. No brand is ever culturally proactive, and no brand affects cultural change, but some are more culturally attuned than others and react quicker. Being rapid to adapt to cultural change often gives brands an edge.

Before any commercial brand gets involved, cultural changes start in community centres and village halls, schools, universities, hospitals and labs. They are the places where ideas take root. Then come marches, protests, speeches, shows, media coverage and then, after many anxious meetings and risk assessments, we might see a culturally advanced advert appear.

Before you boldly take a knee with Colin Kaepernick, you will have sat on your hands in a million meetings trying to think about every racial weakness Nike and its employees have ever exhibited, you will have sat through a plague of ‘what if’ scenarios involving sweat shop factories and rubber plantations, wondering endlessly about risk and reward. You want cut through because cut through sells stuff and the differentiation can lead to long term affiliation, but at what price?

So recently there was Gillette, and they timed it about right. The famous post-campaign outrage to their recent film came loudest from laughable dinosaurs and the more awkward questions died away before dad next went to Boots. Whilst the outrage postured on, questions that didn’t grab the limelight included just why did self-declared gender authorities Gillette invent so many products with a Pink Tax on them and why did the brand spend so many years stereotyping men as embodiments of machismo so far past the sell by date? In short, is “The Best Men Can Be?” a u-turn, an apology or bald hypocrisy.

Look at how many years ago Loaded magazine died and metrosexual man emerged with David Beckham stepping out of the urban jungle. We were getting better at being men years before Gillette so ground-breakingly implored us to do so after the #Metoo movement finally convinced them there would be no return to their older definition of a hero. Nevertheless, for a razor blade owned by P&G, quite possibly the world’s biggest shrine to anxious meetings, this was cutting edge stuff.

At ‘Wider Lens’, Gillette was a continual point of reference. Ben Norris had been in a Gillette advert in 2017, ‘Being a Man’, a kind of V1 watertest ahead of the 2019 full-on didactic film. Being a Man drew interest from the likes of Attitude rather than the broader and more garish media. 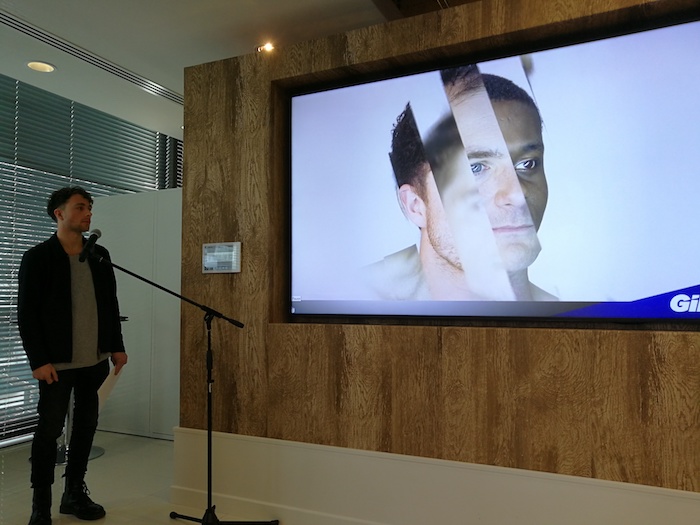 Gillette was referenced  alongside other brands with a reputation for stepping out of cultural gender clichés and stereotypes. Brands like Smirnoff were shown by presenters to be moving in step with an audience that is born out of Shoreditch, Barcelona, Nob Hill and Central Park, a lucrative market of well-healed early-adopters and influencers, and an audience that  has long ago embraced and normalised modern issues such as sexual preferences, sexuality, parenting responsibility and gender affiliation.

Rather than being proactive about this then, it could be argued that the mighty Diageo corporation is simply following the money with Smirnoff, reinforcing the new stereotypes of the cool and trendy of today, just as it always has. 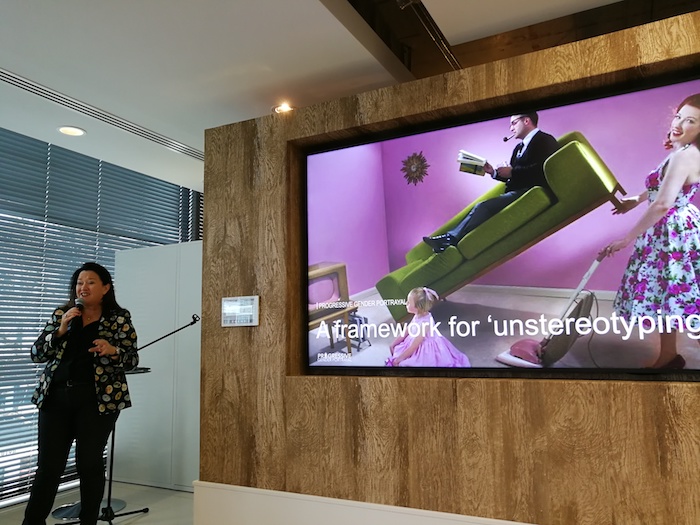 For further evidence I will look to Grainne Wafer who told us all about the process of cultural change at Diageo and how proudly the business has embraced equality. Grainne talked us through Diageo’s learning curve as a business and as a advertiser, She openly showed us the clumsy portrayal of top female DJs in an Smirnoff promo, from 2017, Equalising Music. We were directed to notice how the female positive message had gone a bit awry by showing us female DJS with exclusively female fans on the dance floor. A case of 2 steps forward and one back being better than no steps forward.

Grainne then moved on to the brand that she is closest to, Bailey’s. And here is the video of their modern take on a girl’s night in.

This advert, presented to us n the audience as gender progressive, pushed my cynical buttons. Having just been served an uh-oh ‘look we forgot the men’ Smirnoff advert, here was Bailey’s proudly doing the same. Nothing in this advert would ever help a man get over the potential stigma of ordering a Bailey’s. Bailey’s is a gender pejorative brand for a reason, because brands are reactive, not proactive. The risk of pitching the brand at an emerging male audience would quite possibly, alienate those girl’s night in buyers. There’s nothing wrong with that, and the resulting advert is consciously a bit less girly than its predecessors, but in the end it works because it follows the money, not because it is pushing cultural boundaries.

That is not, in itself, a criticism of Diageo, identifiably a gender progressive business that has clearly pushed hard to be ahead of others as an equal opportunities employer. That just doesn’t mean that it can push consumers into cultural change through advertising and brand marketing.

When will the time be right for Bailey’s to be braver? Once upon a time the answer would have been to look at the data, segment, sample and digital trial. But online trialling is harder now, eroded by online data abuse, social media spotlighting, GDPR and the homogenisation of social media advertising.

The homogenisation of social media begins and ends with the online media owners and these were represented at ‘Wider Lens’ by one of social media’s most loved resources, Ladbible. At ‘Wider Lens’, Ladbible’s Peter Heneghan proudly told us, without a hint of Gerald Ratnerism, that his brand Ladbible had been born out humour that often embraced misogyny and had then grown up by following shares and likes and broadening its base. Through direct followers and shares, Ladbible now pervades the social media of every millennial and Gen Zedder online. The Lad it seems has been extracted from the Bible and now the stories and jokes that they release first meet a rulebook that promotes general loveliness. Campaigns like ‘Trash Island’ and ‘u ok mate?’ are infectious, genuine and driven by cultural causes, tackling, respectively, the environment and mental health head on. The success of these campaigns has not just helped Ladbible to grow up, it has given the brand a growing rulebook on how it is expected to behave.

It should not go unnoticed that Bibles that adhere to, and pervade commandments quite often set rulebooks that start off fresh but weary through the years. The same might be said of brand guidelines, of course. 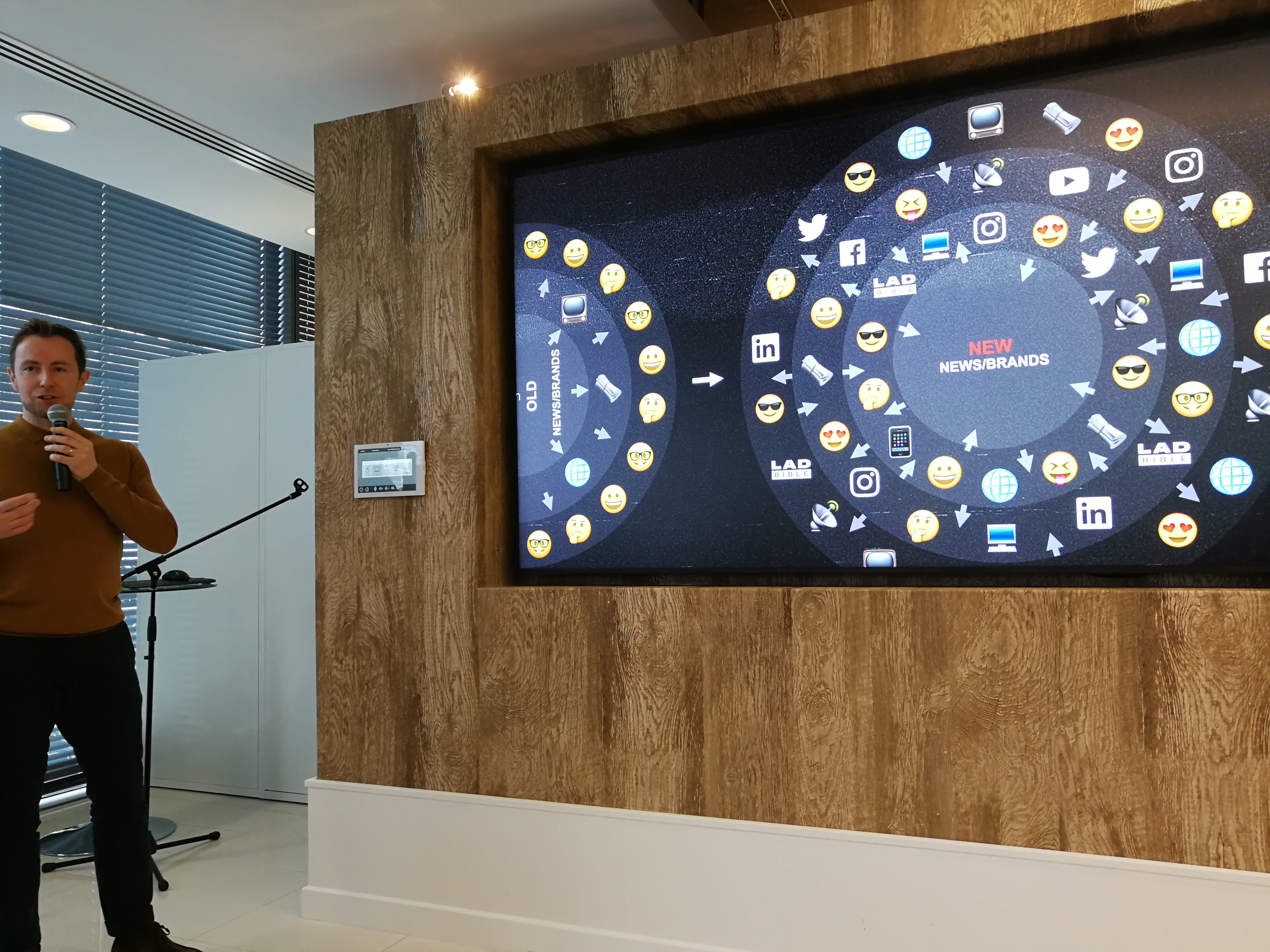 Nevertheless, Ladbible, Peter told us, is not like the media of old but a multidirectional and interactive interface that pops up at all different points in a kind of structureless cloud of discussion. So far, so modern, but he also told us that Ladbible was taking over other meme media corporations, including rival Unilad. And that is the danger, just as once the old school media eventually united under the same few controlling press barons so will social media businesses acquire each other seeking control. Being the next generation’s mouthpiece is where the money is. Even if Unilad was debt ridden and Ladbible’s turnover, at £25M lacks clout, 4.5billion video views in August 2018 alone is quite a stat for the joined up stable.  But keeping it fresh will get harder as Gen Z grows older. Ladbible might drop the Lad as its readers mature, but should it stick of twist?  Once upon a time, the Daily Mail was an agenda-led news resource. It now clings to reach through clickbaiting its departing audience, pushing at extremes, trolling and riling them in order to hang on to its numbers-led advertisers.

My guess is that Ladbible’s growth will be typical of all media owners, driven by a  desire to harness and control the current chaos that t embraces.  Whilst losing misogyny along the way is certainly to be welcomed, a more general loss of individuality will be hard to avoid. Brands will then have something safe enough to embrace with culturally relevant advertising and a new raft of media barons will be born. Once established they will keep a keen eye on any edgy new kids on the media block and move quickly to squash their influence through acquisition. 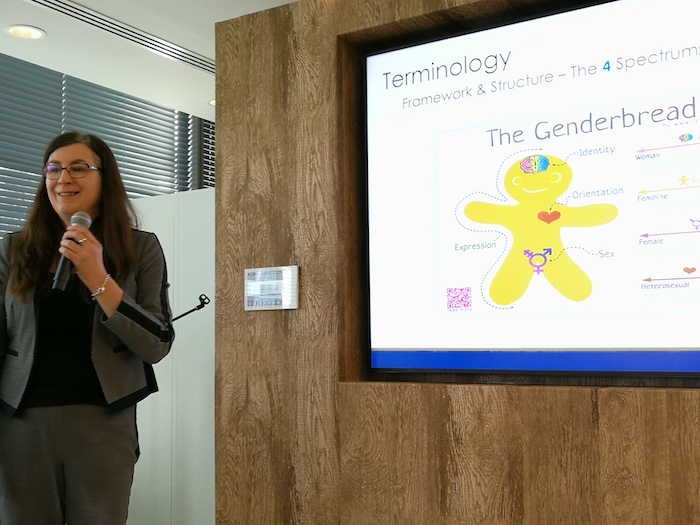 If I am right, so what? Homogenisation could be bad for choice, bad for creativity, but a broader footprint could also unleash the capacity for brands to ask more questions of its audience, be more challenging and more memorable.  At ‘Wider Lens’ Emma Cusdin explained how brands have taking baby steps through cultural change and especially her own field of expertise that is broadly referred to in terms of gender as Trans* and of course she was able to example both horrendous and clumsy marketing that references Transgender.

Paddy Power’s 2012 controversial take on Transgender at Ladies’ Day, Cheltenham encouraged vievers to play spot the difference. It was of course banned. Ironically this archaic piece has mostly been expunged from the Internet, but you can watch it if you are prepared to both fall for Daily Mail clickbaiting and watch a current advert first…

Whilst other attempts to include Trans* have been clumsy, in all probability, any brand that sets out to steal a cultural march will fail in some way, will make mistakes in the eyes of the most alert, attuned and progressive.

But one shining example does stand out. It was already known to me, and Emma Cusdin encouraged us to watch it. In the Experiment, 2017, Heineken found a way to ask the relevant cultural questions of the day, rather than dictate terms. The result is a film that looks and feels like a brand experience event because the underlying message is that here the beer is not trying to force the opinion so it can’t, unlike Gillette, be accused of patronising its audience. It simply asks its participants and views to engage in the conversation – just as Wider Lens so successfully did. The result is genuinely uplifting.