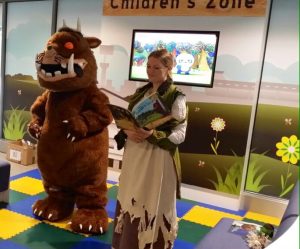 Hamilton Sargent, Contentainment & WDFG Account Manager at Blackjack Promotions offers his top tips on licensing costume characters for campaigns and explores the pros and cons of using off-the-peg or creating your own.

We’ve all become used to seeing costumed characters promoting products in shopping centres, railway stations, airports and other public spaces, and brands and retailers recognise their value in engaging and connecting with consumers – and not just the kids, either!

While many of the characters you’ll see deployed in experiential campaigns will be licenced, like Paddington, the Minions from the Despicable Me film series, or Harry Potter wizards, others will be ‘off the peg’ – no-one really ‘owns’ the idea of a dancing banana, or a generic bear, or Father Christmas…

There are two more options, however, for brands and retailers. They can use their own existing characters, or they can create completely new ones. Many companies already have characters who have appeared in their advertising – GoCompare, for example, has Gio Compario, the opera singer, while Comparethemarket.com, of course, has the Meerkats. Other brands, however, may want to start with a clean slate; or they might want to have a new character they can use for a specific purpose.

So what are the pros and cons of using licensed characters versus off-the peg versus ‘own brand’?

Licensed characters can be expensive, but cost-effective. They are instantly recognisable (or should be – if they’re not, then maybe you’ve licensed the wrong character!) and bring with them a whole range of brand values.

Sometimes, the choice of whether to go for a licensed character may be taken out of the brand manager’s or the experiential agency’s hands. For example, the client may have a pre-existing licensing deal in place which ties them in to a particular film, TV or book property.

This is most obvious with the latest blockbuster films – so recently we’ve seen a lot of Paddington and Star Wars activity.

Characters like these – well-known faces from big name films are someone else’s intellectual property, protected by copyright law and by a whole range of ’brand guardians’. You will need to make sure that your brand values align with those of the character you are working with – and you may have to work within a whole range of constraints about what the characters can and cannot do while promoting your products.

Assuming you do have ‘brand fit’ and you can follow the character owners’ rules, then there are huge advantages to working with an established and recognised character.

Let’s move on to off-the-peg characters – a snowman, rather than The Snowman; a teddy bear, as opposed to Paddington Bear.

You might assume that you’d have a lot more freedom with off-the-peg – and you’d be right, up to a point. There certainly shouldn’t be some of the restrictions that you would get with a well-known film, TV or book character; but you are still dealing with someone else’s intellectual property.

They may not be famous characters known the world around, or they might be ‘classic’ costumes like British guardsmen, beefeaters or even cowboys; you might think like they ‘belong’ to nobody – but someone designed that particular costume, body and face, and someone owns that design.

They will want to know what you want to do with them and how you plan on exploiting their property.

You don’t own the character, you’re just renting it, and what you’re allowed to do with it is limited.

Which brings us on to the third category: characters you already own or which you create and design yourself (or get an agency like ours to design for you). Obviously, they won’t carry the same kind of brand values as a well-known face from a global media property, or a global cultural icon – but you have complete control over them and you have the right to do whatever you want with them.

This means you aren’t just limited to using them in-store or for one particular campaign – you can use it as part of a wider advertising campaign, on your website and more. It’s all about making your costumed mascot known, as it becomes part of your brand identity. By building familiarity and emotional connections with a new generation of children, this creates longevity and brand loyalty that will likely pass up through generations.

Anyone wearing one of your character costumes must follow your rules to the letter – you can’t risk your brand values being undermined by the ‘face’ of your brand being spotted having a sneaky fag in the loading bay, or worse.

Make sure you invest in the relevant training for the people wearing the costume before unleashing them to the masses. The use of mascots and costume characters is all about creating an illusion so all activity needs to be well thought out and sense checked for quality control.