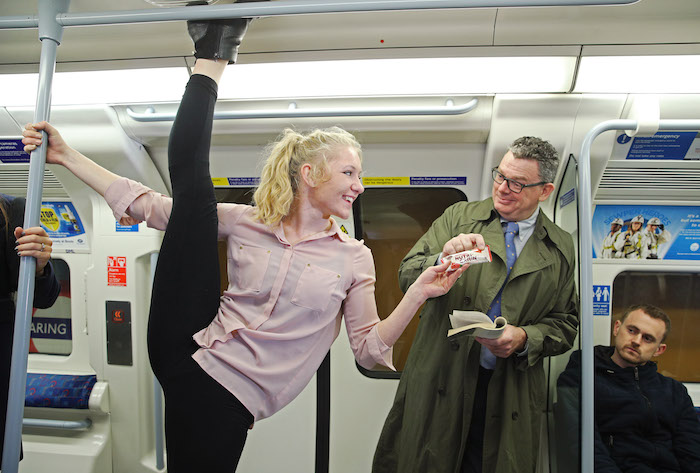 Unsuspecting commuters were given a  show on the  morning of Tuesday 20th November as an  acrobatic duo showed off their gymnastic flair and flexibility in several commuter hotspots in Central London and on the Underground.

The team of elite gymnasts showed off their skills in a variety of athletic and daring moves. They were spotted tumbling down a tube carriage in Charing Cross, vaulting benches in parks, back-flipping down Oxford Street and somersaulting on the South Bank.

The gymnastic commuters were unleashed as part of a marketing stunt from Nutri-Grain to celebrate the launch of their new Nutri-Grain bars, which are made with six B vitamins and iron, known to help release energy from the food we eat and keep us fueled throughout the day.

The acrobats were commissioned on the back of new research from Nutri-Grain, which reveals that nine in ten Brits (89 per cent) experience a slump in energy levels by mid-morning, 92 per cent find themselves craving a pick-me-up snack by mid-morning and one third of Brits (33 per cent) regularly skip breakfast.

The performance came from London-based acrobats Benjamin Jones and Abigail Mason, who together are trained in gymnastics, dance, contortion and martial arts, among other disciplines. The team are part of Nutri-Grain’s ‘morning fuel’ ambassador sampling team who are shaking up the morning commute in London this week appearing at train stations across the city.

A spokesperson for Nutri-Grain said: “We wanted to shake up the dreary commute and show Londoners what it looks like to be fully energized in the morning. Our amazing gymnasts embody what it means to have the ‘morning fuel’ we all need to get through the day.”

After witnessing the  display, commuters were treated to a Nutri-Grain bar.

Agency Taylor Herring were behind the activation.