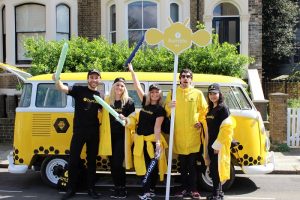 Experiential marketing agency Ambient teamed up with dating app Bumble to deliver an experiential campaign at the Oxford vs Cambridge Boat Race.

The campaign saw race goers being treated to free drinks as they watched the two historic teams compete along the Thames. Guests were also able to enjoy a GIF photo booth inside a Bumble branded VW when they showed Bumble ambassadors the downloaded app on their phone.

The aim of the activation was to drive awareness of the app, and its unique positioning, which puts female users in control by giving them the sole power to start conversations. Over 3000 new app downloads were achieved on the day.