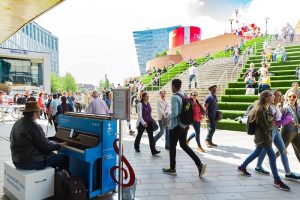 Chavasse Park in Liverpool ONE has been recognised for the fourth consecutive year by the Green Flag Award Scheme as one of the very best in the world.

This international award, now into its third decade, is a sign to the public that the space boasts the highest possible environmental standards, is well maintained and has excellent visitor facilities.

Chavasse Park, the only city centre park to be awarded Green Flag status. Throughout the year, Chavasse Park is home to summer and Christmas celebrations in Liverpool ONE and has played host to everything from a sandy beach to a sub-zero ice bar, to a sporting village complete with a running track and winners’ podiums.  This summer the park’s  Sugar House steps were remodelled in the style of an amphitheatre with the addition of artificial grass, creating a new place for people to relax.

Miles Dunnett from Grosvenor Europe said: “To win the Green Flag Award for the fourth consecutive year is a fantastic achievement.  The green spaces at Liverpool ONE are a beloved part of the scheme and go hand in hand with the line-up providing the very best retail and leisure experience possible. Nestled near the historic Liverpool waterfront and the outstanding range of dining options on The Terrace, we’re keen for visitors to enjoy their whole visit to the city centre.”

Inspired by Liverpool’s 2022 Commonwealth Bid, Liverpool ONE will host a range of sports on Chavasse Park during the school summer holidays.

This follows a range of enlivenment activities that have taken place across Liverpool ONE this year.  In addition to the artificial turf steps and amphitheatre created in Chavasse Park, the Luminarium inflatable maze was in place for two weeks in June and Liverpool ONE welcomed back the award-winning ‘Tickle the Ivories’ installation, providing six public pianos across the scheme from July until September.  Liverpool ONE was also host to a number of events as part of its partnership with The British Style Collective (BSC) during a two-day festival in early July.