Firestone is setting the stage for scores of unsigned acts to showcase their skills to more than 15,000 people, courtesy of a unique partnership with the Barclaycard Arena.

The tyre brand will transform the Birmingham venue’s unsigned area into the Firestone Stage, allowing ambitious musicians to make a fitting first impression inside the arena before the headliners take to the stage.

Officially launched on March 21 at Ellie Goulding’s Birmingham show, the sponsored stage will play host to unsigned artists in the pre-show entertainment arena at selected arena events, exhibiting a wide array of music talent from across the UK to up to 15,800 people.

Situated on the main concourse, the stage will also act as the platform for Firestone’s annual Battle of the Bands competition, where musicians compete to win personalised Marshall amplifiers, music equipment and an opportunity to perform on the stage in future months.

It is announced in addition to a Download Festival sponsorship, where a huge Firestone presence has been confirmed for the event from June 10 to 12 supported by a number of activities to be confirmed.

Innovative music themed sales promotions and incentives have been created for motorists, as the brand adopts an energetic, vibrant approach to sponsorships in 2016 quite unlike its fellow tyre competitors.

Having initially signed a sponsorship deal in August 2015, the Barclaycard Arena has already helped Firestone to generate significant brand awareness across their social channels and within the arena’s Show Lounge, an exclusive Amplify hospitality seating area.

“Hosting some of the world’s top events, featuring state of the art facilities and its central locality within the UK’s second city, means the arena attracts a wide variety of music lovers, ensuring brand exposure to over half a million customers every year.

“Further investment from Firestone in our pre-show entertainment area, is testament to how companies are recognising the benefits of this exposure.

“The partnership will further strengthen our offering for customers and provide a great platform for unsigned music artists to showcase their talents.”

Firestone’s brand manager Stuart Attfield said: “We can see huge potential through our relationship with the Barclaycard Arena, which represents a focal part of our plans for 2016.

“We always strive to activate sponsorships in tangible ways for our customers to benefit from. The Firestone Stage allows us to do that and we look forward to seeing all manner of talented music acts on our stage.

“Who knows, they might go on to perform on the main stage one day, which would be a dream scenario for everyone.” 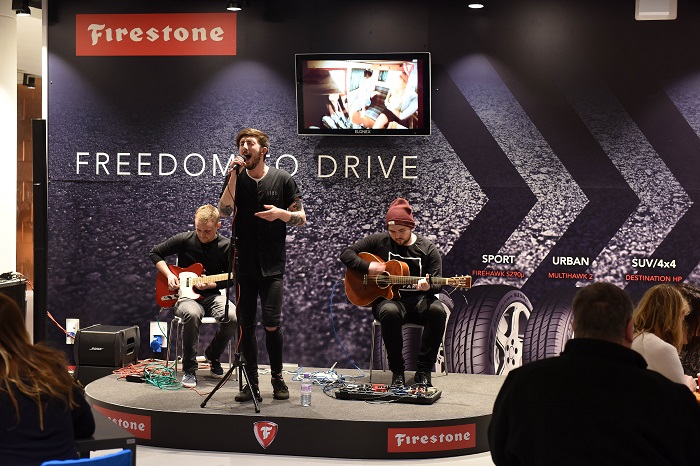