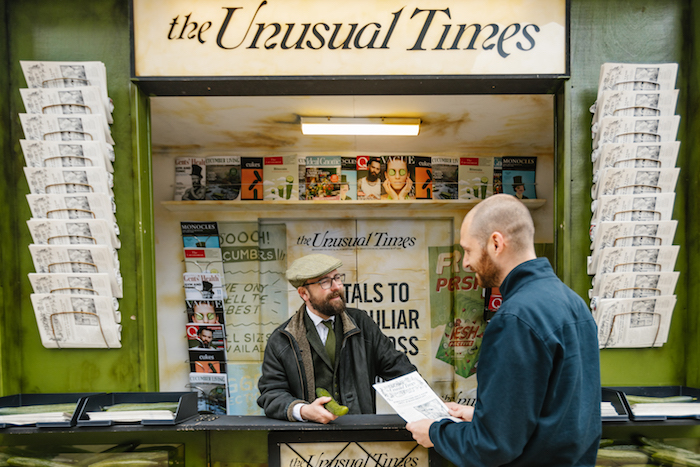 Hendrick’s Gin and creative agency, Space launched their third portal in their curious experiential campaign to bring the super-premium gin’s unconventional world to life, as portrayed in the brand’s latest ‘Escape’ advertising campaign.

‘Portals to the Peculiar’ was a series of multi-sensory events that invited gin drinkers to Escape the Conventional, Embrace the Delectable and sample the brand’s infused liquid through a series of seemingly everyday portals. Space developed the branded events in collaboration with Hendrick’s, The Gazebo Effect and Red Consultancy.

The series began with ‘Lesley’s Laundrette’ in Shoreditch (a normal looking laundrette inviting consumers through a set of washing machines to begin their experience) and was followed by ‘Hendrick’s Bank’ in London Bridge, where guests were invited to enter the experience through an A.T.M. (Automated Transport to the Marvellous).

The third portal was the ‘Not-so-normal-Newsstand’ in Edinburgh, which opened on 12th September for three days, taking guests to a place beyond the overwhelming seriousness of the daily papers and into the delectable world of Hendrick’s. Visitors could interact with the brand through a 25-minute experience, allowing them to sample the rose and cucumber infused liquid.

James Taylor, senior brand manager at Hendrick’s Gin, said: “Throughout the Summer, we’ve been inviting the curious to look beyond the obvious and delight in the unconventional. Hendrick’s behaves unusually because it’s made unusually and our “Portals to the Peculiar” immersive experiences have transported gin drinkers from the everyday into marvellous moments of whimsical oddity infused with rose and cucumber. They have perfectly captured the unique and distinctive world of Hendrick’s Gin and we’ve been delighted by the reception they’ve received by all those curious enough to step over the threshold.”

Jason Nicholas, managing partner at Space, added: “Following the success of “Lesley’s Launderette” and the “Automated Transport to the Marvellous” (ATM), we look forward to welcoming the curious of Edinburgh to our “Not-so-normal Newsstand”. And, as Hendrick’s Gin delights in the unusual, our guests can expect to escape the mundanity and dreary news of the day-to-day and step into a world much more peculiar.”

The experiential activity complemented Hendrick’s summer advertising campaign, which ran from mid-July until September. it included a first of its kind takeover of King’s Cross station, which comprised rose and cucumber infused wall and floor wraps and a national 6-sheet OOH campaign to direct the curious to the nearest watering hole to enjoy a Hendrick’s Gin & Tonic.