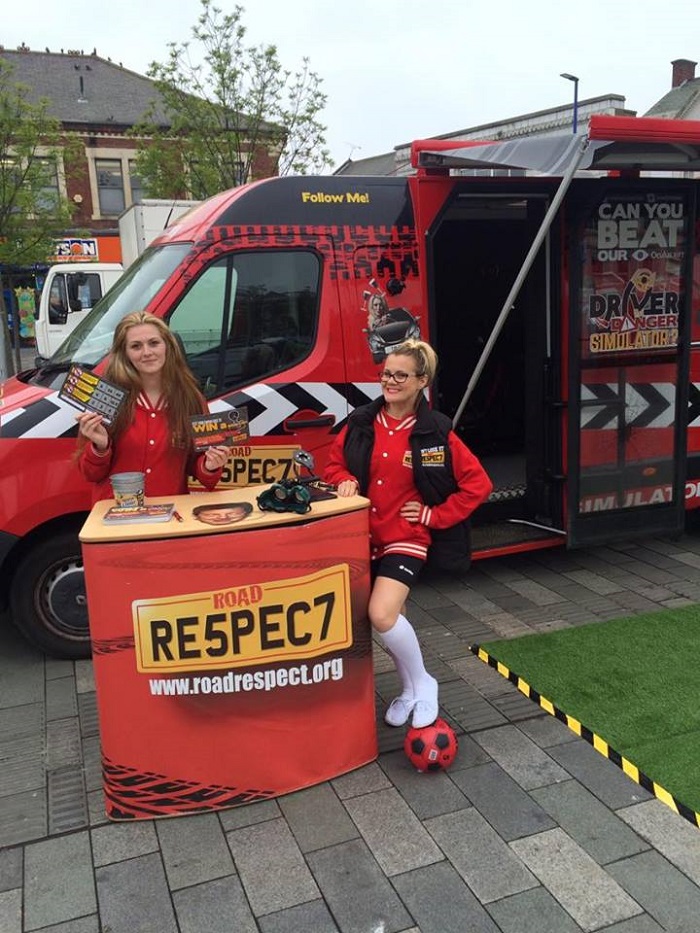 Road Respect, part of the NSRI Road Safety Partnership, has embarked on an 18 day summer roadshow covering 6 areas of the North East.  The campaign is running alongside the Euro 2016 Football tournament to highlight the dangers of drink driving at a time of increased incidences.

Building on the success of previous activations, which have included a popup shop for the 2014 World Cup at intu Metrocentre and a Rugby World Cup bar tour last year in host city Newcastle, the current tour features a promotional referee with a headset mic conducting “drunken penalty shootout” games outside of Roadi, Road Respects promotional vehicle.  European footballer face masks from Ronaldo to Vardy will be given to those who manage to score a penalty, with all activities being captured on GoPro cameras to create social media content linking in with the #AllezTheLads digital campaign.

The tour also features two oculus rift driving simulators housed within Roadi which feature iconic landmarks and areas of the North East, with members of the public gaining points and prizes for driving safely and avoiding distractions.  An online leaderboard and social media integration within the programme encourages a brilliant level of competition and increased engagement, with Road Respect’s new monthly paper competition enabling visitors a chance to win a free dash cam for answering road safety questions correctly.  The Road Respect “driver of the day” competition will also be in full flow, with the safest Oculus Rift user of each event winning themselves a £15 iTunes voucher.

The campaign links in with the Road Respect Euro 2016 Bar Tour with event teams visiting bars during England games with a giant iTab and new bespoke Road Respect Motorway Madness game, free competitions, information and giveaways to promote road safety and engage with those who may be likely to offend during a time of increased drinking.

The tour runs from June 10th – July 10th and will visit three areas in each of the six  North East regions.