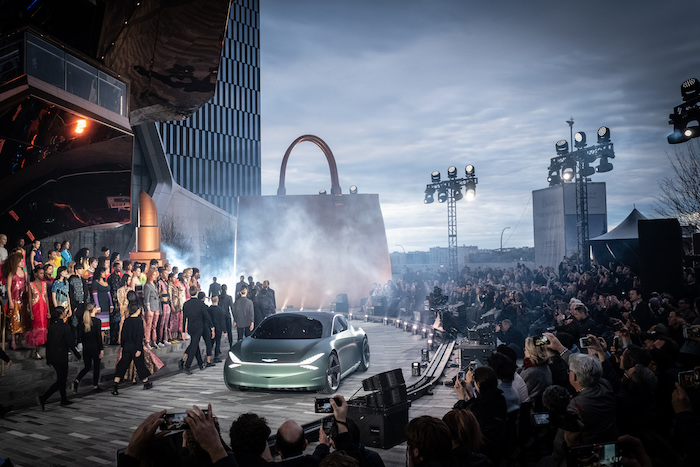 INVNT has partnered with  luxury automotive brand Genesis this week, to launch its new Mint Concept, the all-electric, luxury car for the city – ahead of the New York International Auto Show, which kicked off on Friday, April 19.

INVNT provided strategic and creative insight, while managing all production for the exclusive experience, which was the first official event to be held at New York’s new Hudson Yards development. The launch, which was live streamed globally via the brand’s social platforms, represented a partnership with interactive digital agency, VAST and INVNT’s own branded content team from HEVĒ. They collectively brought to life the ‘Small Car, Big City’ narrative through the lens of Genesis and CondéNast title Vogue, who were involved in orchestrating the runway show.

The event was anchored by scenic elements including a giant pair of headphones and a handbag, and featured live music performances from Printz Board, Lipstick Gypsy, Tainy, and the Sing Harlem Choir, all the while 75 dancers performed a series of choreographed acts and models showcased the fashions of world-renowned designer Prabal Gurung as they walked the runway.

The Genesis Mint Concept concluded the show as it dramatically travelled around the base of a significant landmark at Hudson Yards, ensuring the hundreds of guests had a front row seat to the global debut of the new concept. The design reimagines the iconic shape of the city car and has been tailored with respect to the needs of the modern lifestyle, and it represents a collaboration among Genesis Design Studios in countries including Germany, the U.S and South Korea. The Mint Concept serves as proof that luxury doesn’t have a size.

Manfred Fitzgerald, executive vice president and global head of the Genesis Brand said: “We were thrilled to showcase the Genesis Mint Concept in this breathtaking setting at Hudson Yards in New York City. Our outstanding professional partners made this event a success, and thanks to INVNT’s seamless on-site delivery we were able to successfully create an unforgettable moment for Genesis and our Mint Concept.”
Scott Cullather, CEO, INVNT added: “With its fashion show from the talented Prabal Gurung, upbeat sounds and choregraphed dance routines, all set within the iconic Vessel building – a modern-day architectural design feat in itself, the event was a true embodiment of the progressive, design-focused Genesis brand. INVNT is absolutely thrilled to be working with Genesis.”