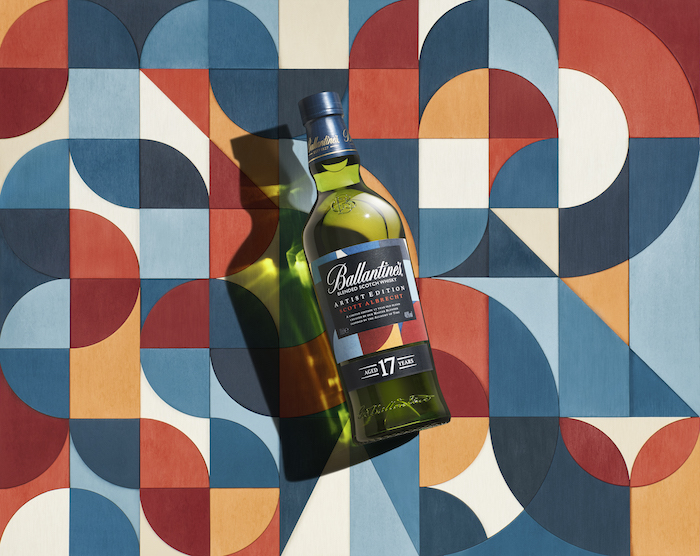 The unique bottle and packing design and an accompanying film received its worldwide debut in South Korea Dec 4th to mark the launch of Ballantine’s limited-edition 17-year-old prestige Scotch whisky in the region. It will be rolled out globally on New Year’s Day.

The film captures areas of Albrecht’s life that hold significant meaning for him. Utilising a range of camera techniques including inserts from a DV camcorder and use of Bolex, the team captured Albrecht’s workshop in Brooklyn, his basketball court in New Rochelle, and several areas around New York that he uses for inspiration in his work.

Albrecht has created murals throughout the city, including a design at the Brooklyn Ferry Terminal. For this collaboration, Albrecht created a bespoke wooden piece ‘A Shared History’ that blends Ballantine’s brand colours with his own signature palette.

The campaign has been crafted to resonate with South Korea’s growing demographic of younger whisky drinkers and will run across digital and social channels. A print ad will also run in magazines throughout South Korea.

The campaign reflects a more contemporary and dynamic change of direction for the Ballantine’s Prestige brand, as they continue their drive to appeal a younger audience in key markets across Asia.

Marie Constanty, senior brand manager for Ballantine’s said,“Leagas Delaney’s campaign perfectly captures the essence of Time Well Spent. Talent and craft of the kind Scott Albrecht delivers takes time, and so do our whiskies. It’s a beautiful tribute to the creative spirit, and we’re confident that it’ll resonate with existing and new whisky drinkers, who crave something special. From the design of the bottle to the taste of what’s inside, we’re thrilled to be bringing this to market.”

Tim Delaney, founder and chairman at Leagas Delaney said,“Ballantine’s new whisky is the latest expression for its Prestige Range, a sublime range of quality whiskies enjoyed in over 100 countries around the world. South Korea is a burgeoning market for whisky, and one where a younger demographic of discerning drinkers are increasingly looking for quality. We’re proud to partner with Scott and his idiosyncratic visual language, to create a new iteration of Ballantine’s rightly lauded 17-Year-Old Scotch.”

Albrecht will attend a launch event in Seoul to showcase the campaign and demonstrate his artistic approach to the campaign.