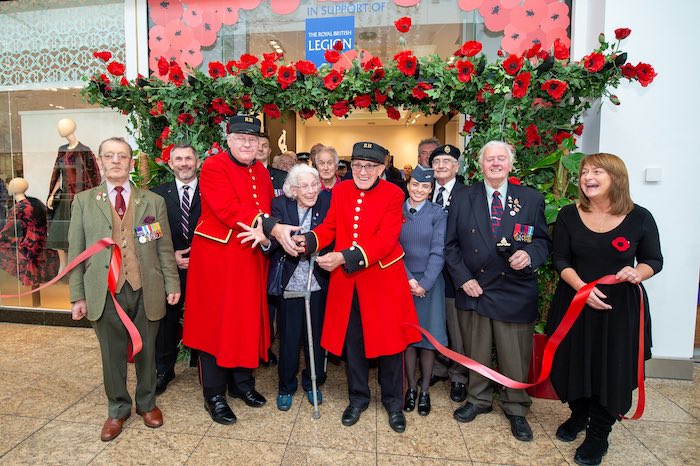 As a leading supporter of The Royal British Legion, Meadowhall is hosting a pop-up poppy store in the lead up to the centenary of Armistice Day.

For two weeks, the store on Meadowhall’s Park Lane will host a visually-engaging poppy installation and screenings of The Royal British Legion’s Thank You 100 film.  The pop-up provides an opportunity for the public to say thank you to those who have served and sacrificed in World War One and the conflicts since.

War veterans from across the country were welcomed to Meadowhall for a special Thank You event to launch The Royal British Legion’s annual Poppy Appeal, in Sheffield on Friday. Chelsea pensioners, John Helliwell, former Royal Artillery Officer, and John Riley, ex-Royal Engineer, were special guests amongst several other war veterans who were welcomed to the centre to commemorate Armistice Day.

Volunteers will be selling poppies from the Meadowhall pop-up and proceeds will provide lifelong support for the Armed Forces community, including serving men and women, veterans and their families. With 2018 marking the centenary of the end of World War One, it is hoped that this year’s Poppy Appeal will exceed the £46.6 million raised nationally last year.