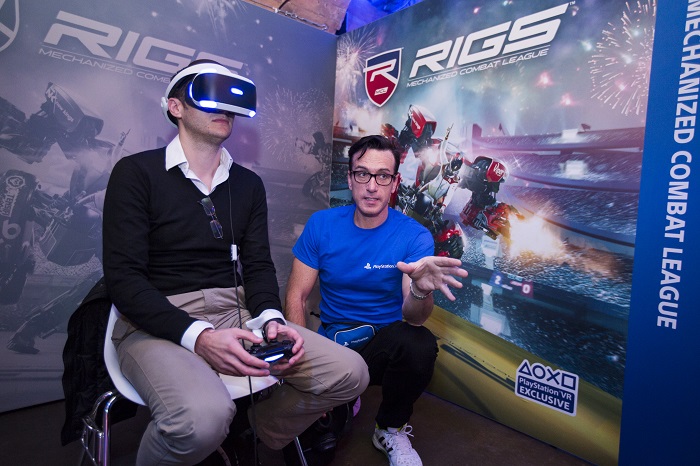 Visiting six locations throughout the UK, The Future of Play Tour features a series of experiential PlayStation4 events offering gamers the opportunity to experience the immersive world of PlayStation VR.

Kicking off on the 22nd September, The Future of Play Tour headed to EGX, the UK’s biggest gaming event, which took place at Birmingham’s NEC, followed by two pop up experiences in Buchanan Galleries in Glasgow and Meadowhall shopping centre in Sheffield. The tour has been designed to allow the maximum number of visitors to be able to trial – with 20 playable stations available for both pre-booked appointments and walk in trials.

The latest stop on The Future of Play Tour saw Circle Agency and PlayStation transform the East London events space Kachette into an immersive venue where fans could experience a range of PlayStation VR titles. As part of the official launch week celebrations, the pop up event will be open from Wednesday the 12th of October, through Sunday the 16th of October. The titles being offered to gamers include racer Drivecar VR, Gotham-themed adventure Batman: Arkham VR, survival horror Resident Evil 7: Biohazard and alien shooter Farpoint.

Outside of the PlayStation VR area, gamers are also able to see the latest cutting-edge technology from Sony up close, with the PlayStation 4 Pro on display before its official launch on November 10th.

A host of experienced brand ambassadors were on hand to walk visitors through the games and offer advice on the PlayStation VR headset, the PlayStation 4 consoles and accessories.

Tom Whitaker, group marketing manager at Sony Interactive Entertainment UK said: “PlayStation VR changes the way we play games and trying it is fundamental to understand that. We wanted to let as many people as possible experience The Future of Play Tour, to showcase what PlayStation has in store this year.”

Claire Stokes founder and managing director at Circle Agency said: “If ever there was a product that suited an experiential marketing strategy at launch- this is it.  Virtual Reality is a product that is extremely difficult to comprehend without the opportunity to experience it firsthand.  Being able to provide that opportunity for gamers nationwide has been an absolute thrill.  We get to watch first hand as people experience this completely immersive and often incredibly emotive experience for the first time.  If you haven’t already tried #PlayStationVR- come and visit our future events, I promise that you won’t regret it.”

The Future Of Play Tour  is also set to visit Cabot Circus in Bristol  and Old Granada Studios in Manchester.