An exclusive UK partnership between Ambient, a specialist experiential marketing and ambient media agency, and Team Yakovlevs, world leaders in precision formation aerobatics, brings the launch of Skytyping to UK airspace in 2021.

The development is set to give a unique option to brands and events looking to create memorable experiences and maximise brand exposure. Skytyping has been a popular advertising format in the USA for over sixty years: used by brands such as Pepsi, Coca-Cola, Coors and Coppertone for product launches, music festivals, movie premiers, national sporting events and other promotional campaigns.

However, until a change to the aviation law in the UK in 2020 Skytyping has not previously been possible in the UK. 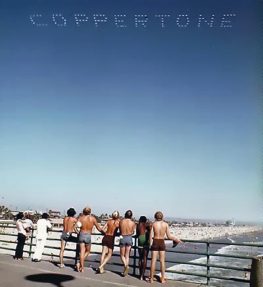 Skytyping is an established, valuable advertising campaign tool used throughout the USA. The Pepsi-Cola Corporation was one of the first multinational brands to use Skytyping for marketing and made aerial advertising a big part of their successful marketing strategy. Skytyping provides advertisers with five-mile-long Sky Billboards™ typed at 10,000ft, visible from the ground for more than 10 miles, delivered along England’s coastlines and at site specific locations. The messages are typed in the sky using ‘smoke’ derived from non-toxic, biodegradable mineral oil, with all flights carbon offset. There is zero noise impact – at 10,000ft the aircraft are inaudible from the ground – in stark contrast to loud, low-level banner towing aircraft.

Jonathan Schultz, CEO of Ambient Media comments“ This is an industry first for the events, brand and advertising world. Following a 10-year development programme to bring this advertising format to the UK Team Yakovlevs and Ambient are now the only team in the UK capable of delivering the world’s largest aerial advertising medium. Literally offering the sky as a blank canvas for brands to print their message, Skytyping is a thousand times larger than any ground-based billboard and is custom placed to ensure brand exposure is maximised in a unique and thrilling format to huge audiences – taking advertising to previously unscalable heights.”

Sky Billboards™ are created by flying five aircraft in formation, delivering computer-controlled pulses of smoke, which, just like a dot-matrix printer, creates letters and symbols, combining to form a message. Team Yakovlevs are the only team outside of North America to have mastered the technology.

Jonathan Schultz, CEO of Ambient Media adds, “The theatre of seeing 5 aircraft flying in tight formation and the anticipation of a message being revealed in the skies is an experience in itself and one which you will be sure to remember and talk about. The extended reach of such shareable content adds just another layer to this powerful media format.”

“Sorties can be delivered overhead a specific location such as a music festival or sporting event, or along a flightpath such as a beach run to support national celebrations, brand promotions and advertising campaigns. Skytyping is capable of not only broadcasting pre-programmed messages of up to a quarter-mile wide and five miles long, but also dynamic, real-time reactive posts including live sports scores, news, results, viral campaigns and social media posts, broadcast live by the Skytyping formation.”

Jez Hopkinson, Principal and Lead Pilot for Team Yakovlevs comments, “We are proud to be the pioneers for UK Skytyping. With more than 20 years’ experience of delivering air displays across the world, it is great to be returning to UK skies to deliver this unique and dynamic marketing service, the likes of which have never been seen here before.” 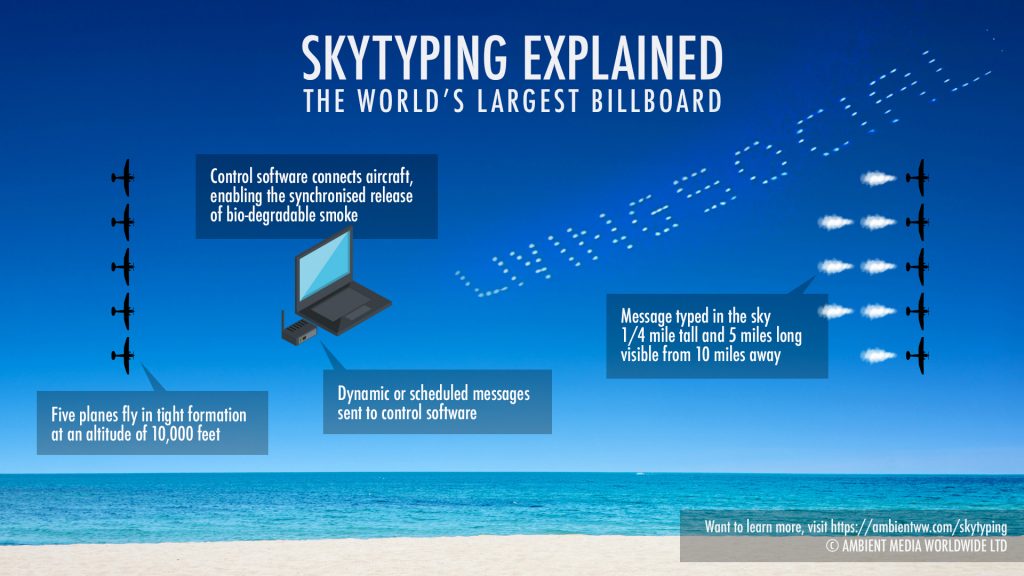