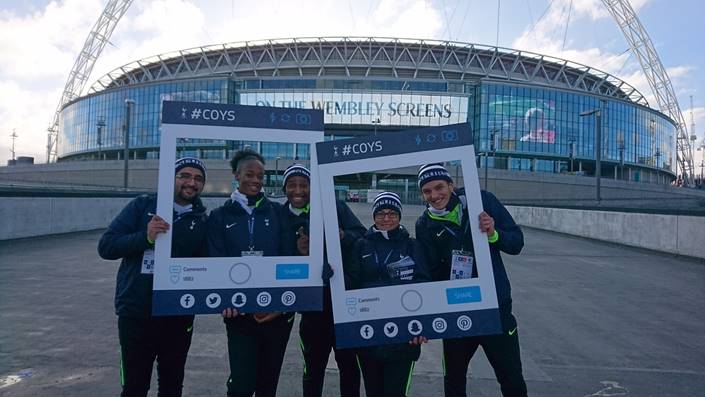 Tottenham Hotspur FC has again picked specialist staffing agency StreetPR to provide a team of ‘fanbassadors’ – fan ambassadors, to welcome supporters to its games. This time, though, they will be delivering services at the soon to be opened new stadium, currently called the Tottenham Hotspur Stadium, until a naming rights deal is signed with a sponsor.

The first official Premier League match to take place in the new stadium will be against Crystal Palace on April 3 2019. However, under official rules, Spurs must hold two test events before it can get a formal safety certificate. The first of these will see Spurs’ Under-18s side face Southampton in the Under-18 Premier League on Sunday 24 March, with 30,000 tickets distributed, while the second will see a Spurs Legends team face the Inter Forever legends on Saturday 30 March, with 45,000 fans expected.

StreetPR ‘fanbassadors’ will be deployed outside the new Tottenham Hotspur Stadium in the hours before kick-off. Their role will be to meet and greet fans and hand out flags, stadium guides, posters and offering face painting for youngsters.

The contract between Tottenham and StreetPR at Wembley was initially for one year, covering the 2017/18 football season, for all Tottenham home matches at Wembley. That contract has now been extended to cover the 2018/19 season at the new stadium.

StreetPR has a strong track record delivering face-to-face marketing and brand ambassador services at football grounds and other sports stadia. Before working with Tottenham at Wembley, it actually helped the Wembley Stadium management to build a bespoke customer service team of over 150 staff who worked at every Wembley event over a two-year period, including the FA Cup Finals, England Internationals, World Title Boxing and concerts from Eminem, AC/DC, Ed Sheeran and One Direction. That customer service team, recruited and trained by StreetPR, covered all areas of the stadium both inside and outside the complex.

Dorian Payne, Client Services Director at StreetPR, says: “What can I say? We were over the moon when Tottenham asked us to provide fanbassadors at Wembley, and you can imagine how chuffed we are to be working with them at their amazing new stadium. They are a worldwide brand, and we’ve been developing a whole range of new fun and engaging activities which we’ll be rolling out as the season progresses to engage fans, and drive Tottenham Hotspur’s membership sign up.”

Tottenham played its last match at its historic home, White Hart Lane, on May 14th 2017. Its last match at Wembley was, fittingly, its game against North London arch-rivals, Arsenal on Saturday March 2 – it was a one all draw.