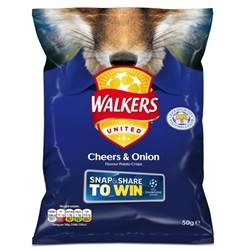 Walkers will be gifting fans a special edition of their new ‘Snap and Share’ packs – the appropriately named ‘Cheers & Onion’ at Leicester City FC’s UEFA Champions League match against Sevilla on March 14th.

Mirroring the recently launched range of Walkers sharing packs which are adorned with selfie-ready cheering faces, these limited edition smaller 50g packs have been made over with the Leicester City fox mascot, in celebration of the match.

The special edition packs will be handed out to fans upon entry to the stadium on the night of the match to help them get into the match spirit.

Fans in the stadium can light up their social media channels with the packs, which give them the chance to win a signed LCFC shirt, courtesy of Walkers. Fans take a picture combining their face and the fox’s and upload it to Twitter or Instagram using #Fearless and #Walkers by 15th March 2017, to enter the draw.

John Savage, Brand Manager for Walkers said: “As long-time supporters of Leicester City, we know that something tangible really goes a long way with fans. We had a great response to our Salt and Victory special edition in 2016 and I’m very excited that we’ll be handing out special limited edition Snap & Share packs of Walkers, made over with the Leicester City iconic fox mascot, to all fans at the stadium on the night of the game. These packs mirror the recently launched range of Walkers sharing packs, which are adorned with selfie-ready cheering faces.

“I hope we’ll see lots of Leicester fans sharing selfies across Facebook, Twitter and Instagram with our special packs – and having a tonne of fun doing so.”