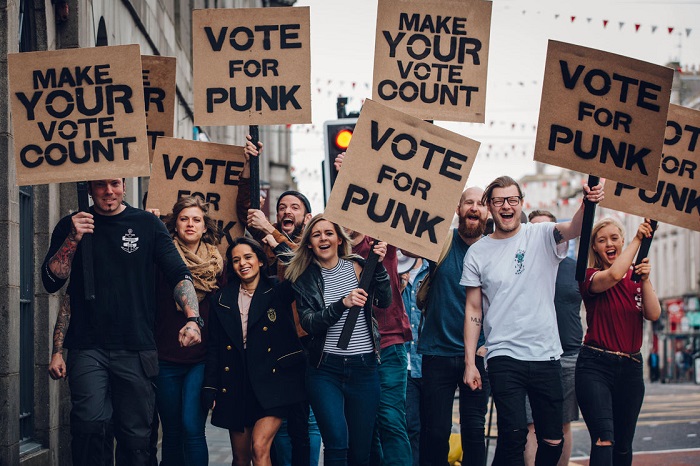 BrewDog is  encouraging the wider public to use their vote on Election Day by offering a free beer to anyone who casts their vote on Thursday. To claim a free Punk IPA, voters need to take a selfie outside their polling stations and show it to bar staff at any UK BrewDog bar.

Those who opted for a postal vote can redeem the offer by showing bar staff email confirmation of their postal vote registration. The offer extends to Friday 9th June, when the electorate can either celebrate or commiserate the results with the free beer offer.

In the run-up to the General Election, the BrewDog polling team conducted street polls across the country, asking people to share which party will be getting their vote.  BrewDog offered a free can of its flagship beer, Punk IPA, to all pollsters willing to divulge their political persuasion. According to the Punk-powered poll Theresa May will be packing her bags as it predicts a landslide victory for Jeremy Corbyn’s Labour party with 56 per cent of the vote.

The Conservatives received 17 per cent of the vote, with around one in eight (13 per cent) of the beer fueled voters saying they would be backing the Green Party.   Members of the public who were yet to vote were polled outside BrewDog bars nationwide on Monday 5th and Tuesday 6th June.

James Watt, co-founder of BrewDog, commented: “With elections come countless polls and sketchy analysis, with an almost guaranteed track record of inaccuracy. Beer has the ability to bring out our most candid side so we thought giving people a Punk IPA before asking them to share who they will be voting for would result in a more honest response. Who knows, this could be the most accurate election poll the world has ever seen.”

James Watt added: “Whatever your views, whatever your status, every vote was created equal. An election is a key moment for those that feel marginalised or under represented to stand up and be counted. We wanted to raise a glass to those making their voices heard today.”