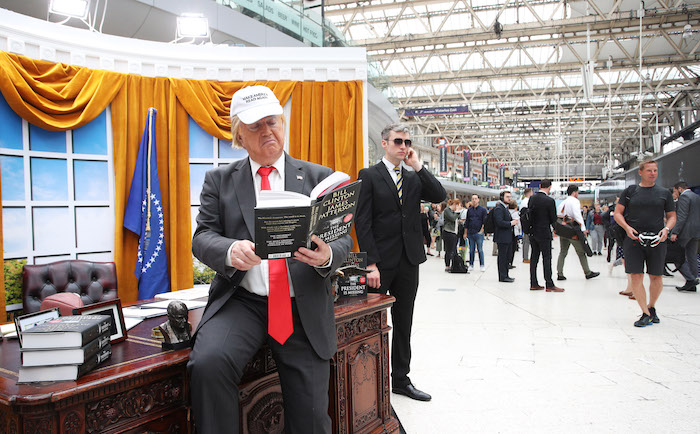 The team at Century, Penguin Random House, and MKTG invited London commuters into a different kind of office this week, to celebrate the launch of The President Is Missing a unique collaboration between James Patterson and former President Bill Clinton.

‘The president is missing so what better way to communicate that than an empty seat in the Oval Office and opening that office up to London commuters in Waterloo Station. The Oval Office is so iconic and we realised people just love taking a seat behind the Resolute desk! Even though it’s a replica, it’s so fascinating to watch people take up the seat of power; it gets to the heart of the book – who gets to do that job, and could you deal with the unique pressures, the impossible decisions and the very real dangers of being the US President?’ – Rebecca Ikin, marketing director

The campaign included an Oval Office photo-booth activation in Waterloo Station, complete with replica Resolute Desk and secret service personnel. People taking part were invited to pick up the phone and take a call from the President – Bill Clinton and James Patterson were on the other end of the receiver, talking about their writing collaboration.

In addition to the experiential activity, Century have secured the biggest and most impactful sites in two of London’s busiest main terminal stations. Conveying the cyberterrorism themes of the book, iconic motion screens at Waterloo and Euston featured a ‘hacked’ ad creative.

‘Our stunt-ads on the iconic motion screens at Waterloo and Euston will grab attention within the station environment. We play on the cyberterrorism themes in the book – the first ‘low-fi’ screen repeating the words ‘Missing,’ making it look like the ad infrastructure and I.T. has actually been ‘hacked,’ before the screens flicker and fill with the announcement that ‘The President is Missing.’ Surrounded by staff, media and secret service, the President cannot go missing – except now he has – the thrilling conceit of the book runs through every touchpoint of the campaign.’ – Rebecca Ikin, marketing director

Charlotte Bush, director of publicity & media relations added, “Monday was the global publication day and the authors are busy promoting the book in the States. The Oval Office at Waterloo provides a perfect focal point for our UK PR and complements the high-profile interviews with President Clinton and James Patterson we have secured to run across broadcast and print media this week.”

Static poster sites across the national rail network featured the phenomenal pre-publication reviews of the book including an endorsement from Lee Child who calls the book ‘the political thriller of the decade.’ In-store theatre in local bookshops like Foyles, and chapter sampling, completed the publication day activity.

‘This kind of domination and experiential activity is usually reserved for the most high-profile entertainment brands and film franchises, but we feel that books should be able to compete in this space – there’s nothing finer than a great book and the reader’s own imagination – a thriller like The President Is Missingexemplifies that.  It has been fantastic to be amongst commuters and readers – talking about books and reading, and giving people a first glimpse of the book. Word-of-mouth drives book sales and we hope we’ve got people talking.’ – Rebecca Ikin, marketing director

Sophie Taylor, business director at MKTG, added: “The worldwide launch of an epic novel co-authored by James Patterson and a former US President warrants an epic launch activation.  We wanted to build a visually arresting and engaging installation that would allow political thriller fans to immerse themselves into the themes of this gripping story, and capture and share their moment behind the famous desk.  Our replica Oval Office at Waterloo and supporting campaign has whipped up a frenzy of anticipation for what is sure to be the book of the summer.”