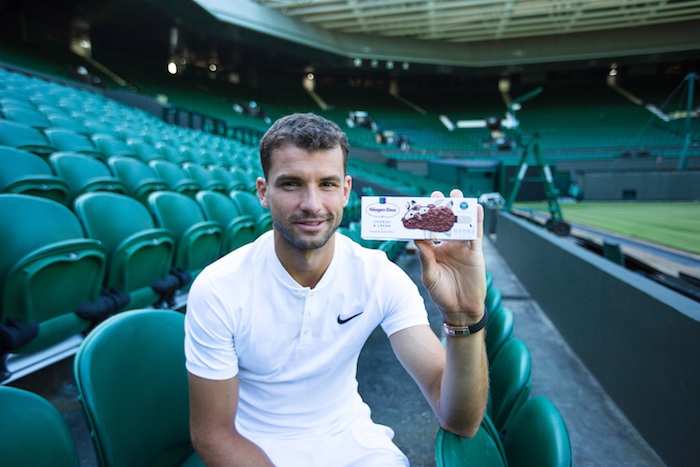 In 2018, Häagen-Dazs is returning to the All England Club as the Official Ice Cream of The Championships, Wimbledon, for the third year running. This year, in an inspired celebration of their ambassador Grigor Dimitrov’s favourite ice cream flavour, Cookies & Cream, the brand is challenging the classic champion Strawberries & Cream to an epic battle to find out which will be the No.1 flavour of the summer.

The “Let’s Play” campaign, devised by Space, aims to highlight the fun, playful characteristics of both the brand and Dimitrov by introducing his favourite flavour, Cookies & Cream as the disruptive new challenger to the traditional favourite ‘’champion’’ Strawberries & Cream.

To mark the collaboration, the brand is introducing Cookies & Cream, on a limited-edition stick bar designed by Grigor. This will be launched exclusively for Wimbledon to further drive buzz and rival Strawberries & Cream head-on for the duration to become the must-have accessory of The Championships.

Grigor Dimitrov, global ambassador for Häagen-Dazs, says: “I’ve been a Häagen-Dazs Cookies & Cream guy all my life, so when my favourite ice cream brand asked me what flavour I wanted as my limited-edition for my favourite tournament, the answer was obvious as it’s the one flavour I can’t live without. I’m thrilled to be the creator of the flavour challenge for this summer’s #letsplay campaign and had a great time collaborating on my limited-edition which I hope everyone will get to enjoy during The Championships. I love Wimbledon and all its traditions, but this time, I am hoping to start a new one with my Cookies & Cream.’’

The campaign will be activated across a series of content films, placed through Facebook, YouTube and Instagram, as well as out of home and in-store across all major supermarkets. The ‘Champion vs Challenger’ campaign will also be brought to life on-site at the Häagen-Dazs parlour at The Championships with a face-off between Wimbledon’s favourite strawberries and cream-inspired ‘Champion’ recipe and Grigor’s favourite cookies and cream inspired ‘Challenger’ recipe.

In the build-up to The Championships, Wimbledon, the brand will also be activating the ‘Champion vs Challenger’ series around LTA events, including The Queen’s Club featuring fan engagements with Grigor and the Women’s Tennis Association’s (WTA) Tennis On The Thames event at Bernie Spain Gardens on London’s Southbank, at the foot of the OXO Tower. Here, the brand will bring the #LetsPlay campaign creative to life for consumers in the form of a ‘Champion vs Challenger’ piñata game, in which consumers will be invited to participate, with free ice cream sampling happening all day on Thursday 28th June. Fans will also have the chance to challenge a secret women’s tennis star, who is a huge Häagen-Dazs fan and join in the flavour challenge.

Arjoon Bose, head of marketing at Häagen-Dazs, says: “We are thrilled to be launching our third Häagen-Dazs summer as Official Ice Cream of The Championships, Wimbledon.  This year, however, we wanted to be more disruptive and playful, taking a cue from our very own super fan and ambassador Grigor Dimitrov who really germinated the idea for this unexpected flavour challenge, to create what we believe is our most engaging Wimbledon campaign to date. Grigor is a major challenger for Wimbledon himself and backing #TeamCookies which is certainly raising the stakes. But with our Strawberries & Cream keeping the bar high from last year, can Grigor’s favourite live up to the challenge and convince the nation? You decide!”

David Atkinson, managing director at Space, adds: “Space is proud to bring to life the collaboration between Häagen-Dazs and Grigor Dimitrov to celebrate some of the brand’s classic flavours during this grass court season. We’d like tennis fans and ice cream lovers to try both flavours and declare support for their favourite. So often ambassadors have only a tenuous link with the brand that they support, and it’s been refreshing to work with someone like Grigor who is sincerely passionate about his love for Häagen-Dazs.”

The campaign forms part of a £1million marketing investment, which includes out of home, TV, PR and social.