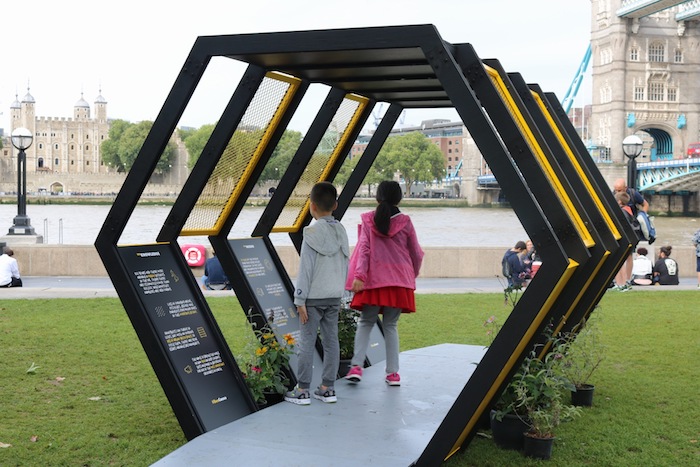 Independent global creative agency Imagination has announced the launch of #BeeCause. The campaign aimed to raise awareness of the vital role bees play in human survival and provoke action among Londoners to help save bees via planting.

Imagination’s Academy Project was formed to give the industry recruits a chance to design their own concept and deliver a live experience. This year’s graduates created the #BeeCause campaign to support Bermondsey Street Bees, an organisation that works with local government, businesses and community groups to maintain sustainable planting initiative for bees.

At the immersive pop-up designed by Imagination, a host encouraged people to come in and discuss the urban bee problem and how they can help by planting. Local London florists and plant suppliers contributed plants – where bees can inhabit – within the pop-up enclosure.

Commenting on the campaign, Claire Dykes, HR Director at Imagination, said: “The purpose of the Academy Charity Project is to provide graduates with a holistic understanding of Imagination and a chance to expand their knowledge. The graduate team behind the #BeeCause Project has taken this as an opportunity to demonstrate its creative capacity and build a campaign that is unique, immersive and supportive of an important cause. I very much look forward to seeing their creative work and careers develop at Imagination over the coming years.”

Sarah Wyndham Lewis at Bermondsey Bees said: “We were delighted when Imagination approached us about this project, which is so perfectly in step with our work to encourage those living or working within urban communities to take action to support bee survival and biodiversity. With green space in London shrinking every year, we need to make London a much more bee-friendly city by increasing the amount of forage available to them.  The team’s creative response has been extraordinary; it will really help to spread the message, raise awareness of the cause and encourage people to play a part in helping to feed bees, even if they only have a windowsill to plant up for them.”

Sam Odell, Strategist from Imagination’s Academy, adds: “The Academy project has been a great experience to be part of. Being in complete control meant that creative thinking was fundamental as we had such a diverse range of skill sets within the team. Producing the #BeeCause had its challenges, but to see it all come together has been a truly rewarding experience for us all. I’ve learnt a lot from this project and all of us involved have been working out of our comfort zone at times. Working with Sarah and seeing her passion for urban bees definitely inspired us on this project and we cannot wait to see what London’s public has to say about our installation.”