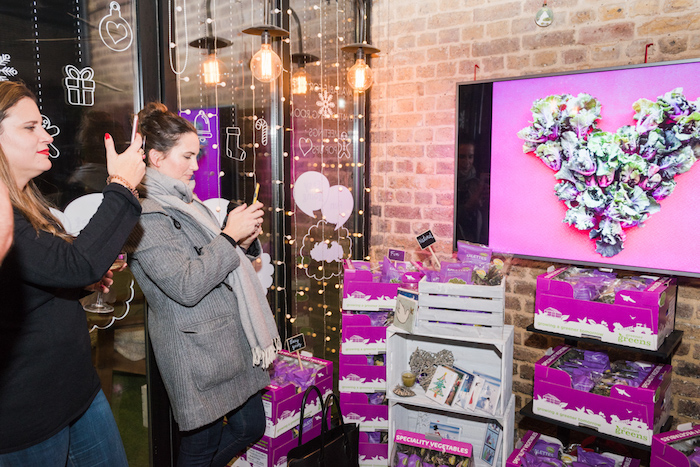 The store was inaugurated with an evening event that gathered food bloggers and journalists. Bridget Colvin, chef and teacher at Michael Roux Jr. and Jamie Oliver’s cooking schools, treated guests to a festive menu of dishes featuring Kalettes as an ingredient.

“We are all familiar with the good old Brussels sprout”, Colvin explained, “but I have to say Kalettes will definitely be on my menu this Christmas, and not just as a side dish. We Brits love our Christmas leftovers almost as much as the festive meal itself. Sadly, left-over Brussels sprouts often end up in the bin, because their flavour seems to intensify once they’re cooked and that can be off-putting. That’s not the case with Kalettes: these little beauties manage to maintain their fresh sweet taste”.

During the four days that followed, the tasty vegetable attracted thousands of visitors who enjoyed free food samples that presented Kalettes in different concoctions including a smoothie, a stir fry and a soup. Consumers were also able to buy a bag of Kalettes at the special price of one pound with all proceeds being donated to Cherry Trees, a British charity that provides home from home respite care for children and young adults with severe learning and physical disabilities.

As a result, Tozer Seeds – the independent British seed company behind Kalettes – raised 415 pounds for the children’s cause. As Jill Cook, head of fundraising and communications at Cherry Trees, explained: “We’ve been working with Tozer Seeds for a few years already and are very excited about this initiative. It will surely help to make a difference for many families”. “We wanted to bring Londoners the chance to sample the product and interact with our brand, but moreover we wanted to do it for a good cause” said David Rogers, UK sales director at Tozer Seeds.