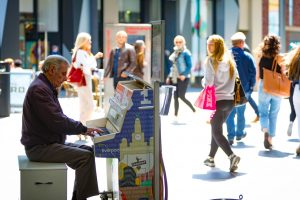 Grosvenor Europe has announced its 2017 enlivenment plans for Liverpool ONE, with a programme of events designed to create exciting, unusual and memorable experiences within the public realm at Liverpool ONE.

Commenting on the news, Miles Dunnett from Grosvenor Europe, said: “We are delighted to announce this programme  of installations, all of which add something unique to the Liverpool ONE experience.  These events will enhance our appeal as an all-day destination, and this type of activity underpins findings from CACI earlier this year that revealed more shoppers would recommend Liverpool ONE as a retail destination than any other in the UK (source: CACI 2017).”

The new enlivenment projects follow the recent creation of the largest wind turbine made from Lego Bricks, certified by Guinness World Records, which was located on Paradise Street.  On May 17, the world record build was created with over 146,251 Lego bricks and measured over 7.5m in height.