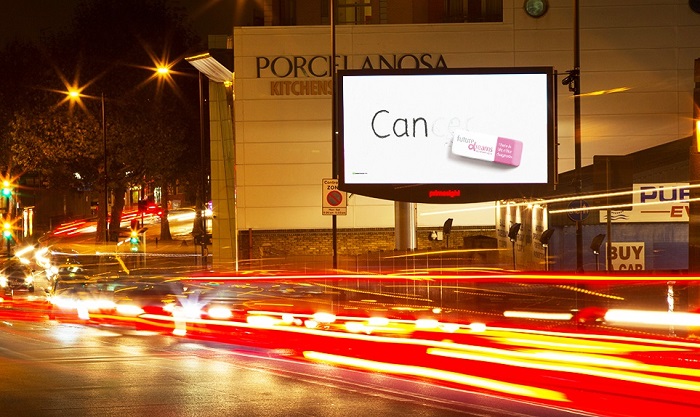 Primesight has partnered with breast cancer charity Future Dreams and creative platform Talenthouse, to place the winning design of the first round of The Ultimate Canvas in a nationwide campaign in the lead up to Breast Cancer Awareness month.

The idea behind this CSR project is to leverage the huge wealth of talent available via creative platforms to benefit charities with limited resources, with the aim of making a significant difference to the public’s awareness of chosen good causes.

The first round of the campaign, which focused on survivorship and life after cancer, had over 400 entries and the winning creative, ‘Cancer Erasers’, created by adam&eveDDB’s Dan Kelly, will go live on 50 sites across Primesight’s Network, reaching over 6 million people in 16 cities including London, Birmingham and Edinburgh.

“With outdoor advertising we can reach 98% of the UK population every week and one of Primesight’s aims is harnessing that power to raise awareness for good causes,” said Naren Patel, CEO of Primesight.

“Dan’s ‘Cancer Erasers’ is a great example of a strong idea executed with visual simplicity and impact. We look forward to raising the profile of Future Dreams as the campaign runs out nationally across Network in the coming weeks.”

Future Dreams’ Spencer Leslie commented: “As a trustee of Future Dreams, our role is to continue the legacy created by our founders Sylvie Henry and Danielle Leslie. Coming from artistic backgrounds they would be thrilled and delighted by this competition and the quality of the ideas that have come forward. They wanted so much to make a difference and this competition has. We are extremely grateful to everyone who has participated and thrilled with the end result.”

Maya Bogle, co-founder of Talenthouse, added: “Talenthouse was thrilled to partner with Primesight to inspire our global creative community to get behind this project with beautiful work that will carry Future Dreams’ worthwhile message into the OOH medium.”

The posters featuring the creative are situated in high traffic locations, with the aim of reaching millions nationwide and making a difference to the lives of women and their families living with breast cancer. With nearly 55,000 people a year diagnosed with breast cancer in the UK, the equivalent of one person every ten minutes, the campaign hopes to raise awareness of a national issue through collaboration with the creative industry.

The second burst of The Ultimate Canvas will be displayed across the UK later this year.