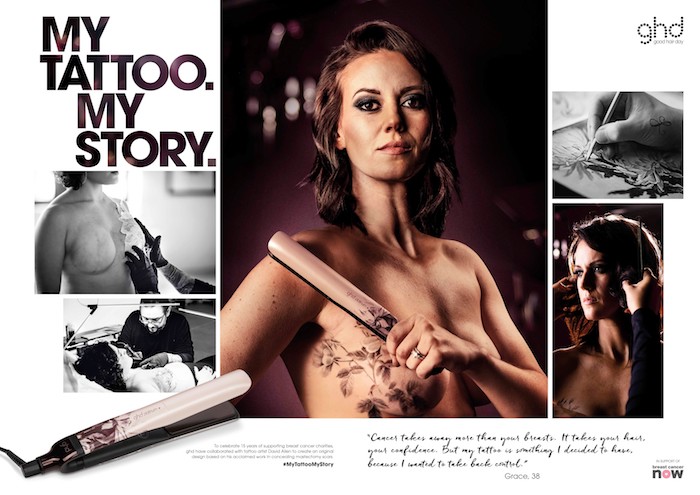 This year’s emotive campaign features tattoo artist David Allen, who has spent 10 years working with breast cancer survivors to create tattoos that conceal mastectomy scars. The work will feature women who have had mastectomy tattoos by David, and how having these artworks has made them feel – with the tagline: ‘My tattoo, my story’.

David’s designs have been displayed at MoMa in New York – and appear on this year’s limited edition ghd platinum+ and ghd gold® styler. As part of the campaign, £10 from every styler sold will go to cancer charities around the world. Breast Cancer Now is the appointed charity for the UK.

Southpaw is handling the creative execution and content delivery for the campaign, including a high end key visual for use across print, digital, social and POS, as well as a 20’’ video for digital, a BTC (Behind the Campaign) video for PR, cinemagraphs and bumper.

The work will run in the US, Europe, Asia, Australasia and South Africa and will span digital, social media, print and in-store for three months from launch on July 25th.

Montse Passolas, Senior Vice-President global Marketing, at ghd, said: “So many people know someone who has been affected by breast cancer and know how much it impacts on women’s lives. Among many other aspects, it also affects the perceptions of femininity, particularly around hair loss and mastectomy. With Southpaw, we created a project that draws awareness on the cause and how David Allen’s tattoos can make some women feel empowered and in control of their bodies again. We feel honoured that Grace, Molly and David have shared their stories with us and we can share them across the world”

Tom Poynter, CEO at Southpaw said: “The partnership between David and ghd gave us the opportunity to tell some remarkable, emotional stories around this difficult issue. David’s artwork is incredible, as are the stories of the women who have his tattoos.
“The campaign is ambitious and ghd’s biggest yet – running across five global markets. It has the opportunity to make a huge difference in terms of fundraising for a huge number of cancer charities.”