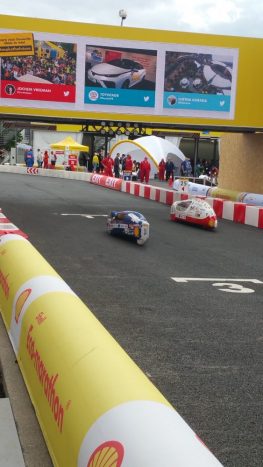 In London at the weekend I was proud to be a voice in support of the experiential events industry as three large scale events conspired to present the capital city as a global stage for new ideas and thought leading initiatives in science, engineering, transport and sport.

On a sunshiny day, 3 diverse but thematically related events showed how to attract dynamic audiences of people who value forward thinking, education and yes, to use that much used word in the Brexit debates, expertise. In fact, expertise and forward thinking was enshrined and celebrated by all 3 events.

I witnessed two of these events first hand and one by report, attending both Shell’s Make The Future event in the QEII Olympic Park and Transport for London’s Transport by Design Festival in Regent Street. Both Shell and TfL were free to attend and their content carefully blended the requirements of multiple stakeholders to create a balance of fun, engagement and learning.

It is next to impossible to nutshell these two events, but I’ll try.

For Shell, we saw an Eco Marathon racetrack event which together with agency Imagination the brand has previously hosted in similar but different guise in Detroit and Manilla. On one level the event is a global students of engineering programme, a competition for making cars that can travel as far as possible around a track on one litre of fuel.

The reach out undoubtedly puts Shell towards the front of the queue for the engineering talent they will need to employ in the future.

The Make The Future event then doubles to provide a stage for Shell incubated businesses to share whilst also connecting with a broader public. This broader messaging helps the company to accumulate brand positives with a public who are keen to hear how a multinational intends to be an influence on our lives in the years ahead.

So in #makethefuture in London, Imagination helped Shell take over the Olympic Park with cars and engineers, performers, entertainers, scientists and musicians with highlight opportunities to see including a self-driving car from Oxford University on the track through stage shows from TV presenter Alex Brooker and singer Pixie Lott. Opportunities to play abounded too with many Shell staff (augmented with staff agency support) helping visitors to get the best from a number of well thought out brand experiences – all expertly built and handled.

If we had played every game, enjoyed the stage shows and seen every exhibit, we would certainly have filled the day at the Olympic Park, but on my day out in London I was enthused to dash across town for the equally broad appeal of TfL’s Festival, supported by Exterion Media.

As with the Shell event, museum style exhibits were blended with multiple family participation experiences. These were low-tech compared to Make the Future but equally joyful. Art, drawing and a sensory cinema drew enough crowds for a short queue. Like Make the Future

queues were enough to demonstrate popularity, but were never forbiddingly long.

TfL took over Regent Street, helped by an army of Orange shirted TfL volunteers, to showcase London transport through the ages and show us where we are heading with Transport in London’s future. It was a fascinating open air museum, taking pride in the complex and often leading heritage and proud history of London’s transport system.

There was a huge mix of content. Visitors took pictures of themselves from behind the wheel of

London cabs or buses, or visited exhibits, interspersed with entertainment and ran through transport from the past (at the Piccadilly end) to the future (at Oxford Circus).

There was a lot to stimulate and a terrific atmosphere in open air music café’s en route. One by frozen yoghurt brand Snog was especially popular. Benches covered on London bus and train style moquette helped to add event immersion and cohesion.

classes on the mayoral bikes that Santander sponsors – the one we saw was packed with participants and onlookers.

This was quite an event, easily underestimated, a chilled out unflustered day in Regent Street that showed London at its thought-provoking and intelligent best.

Over in Battersea Park, London was entertaining people with more track racing. This time the speed was paramount as crowds got involved with the final racing rounds of the global electric 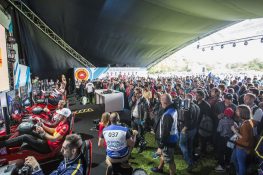 The ePrix came complete with a fantastic Fanzone created by agency GMR Marketing. There were many entertainments. One popular one was a racing simulator, the Formula E e-Race in which 9 drivers were pitted against one fan in races that were broadcast online. Fans also participated in impacting a kinetic floor which powers a Formula E race – created to demonstrate the importance of sustainable and renewable energy. 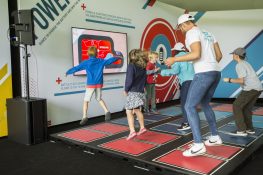 Back at #MaketheFuture we had already seen a kinetic floor driving a fun football game created to demonstrate Shell incubation business Pavegen.

As we do head into the future it is certain that these eco-powered brand experiences will become more and more standard as elite brand experiences keep pace with a world that is changing with remarkable speed.

[pictures – top to bottom: Shell’s Eco Marathon in action – Zorbing by Imagination at #makethefuture in a show of energy – Pavegen’s kinetic footfall football at #makethefuture – old and new advertising in Regent Street at the TfL takeover with Exterion Media – Snap a London Cab – Enjoy a Snog en route to the future – The Slice team guide Santander cycling fans through their spinning clas warmdown – Formula E racing in the GMR Marketing Fanzone – Kinetic action at Formula E ]