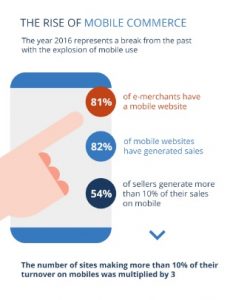 Actinic unveils the results of the tenth annual ‘e-Merchant profile’, a study carried out by Actinic between November and December 2016 comprising data from 2,100 European companies. The study confirms that mobile is fast becoming a key sales channel.

The study shows the speed at which people are adapting to m-Commerce as a mode of consumption. More than a quarter of digital sales are now conducted via smartphone, reaching 28% in the fourth quarter during the run-up to Christmas.

The trend is likely to increase further in 2017. According to the survey, more than half of all e-Merchants (54%) have seen more than 10% of their overall sales taking place through mobile channels, three times the number in 2015.

Office for National Statistics’ figures show that e-Commerce accounted for 15.5% of total UK retail spending in March 2017.  Mobile is fast becoming the most popular mode of online purchasing in the UK, and according to the IMRG Capgemini eRetail Sales Index, e-customers are making purchases increasingly easily via smartphone: we can see a year-on-year increase of 47% in the number of sales made by mobile from 2015 to 2016, driven by a preference for the channel amongst 18 to 25-year-olds.

The number of people making a purchase through a mobile platform in the UK increased by 39% in 2016, comprising 86% of UK digital shoppers. Retail m-Commerce sales will total £31.42 billion in 2017. Online stores understand the importance of mobile sites, with 76% of them now providing a mobile version of their site.