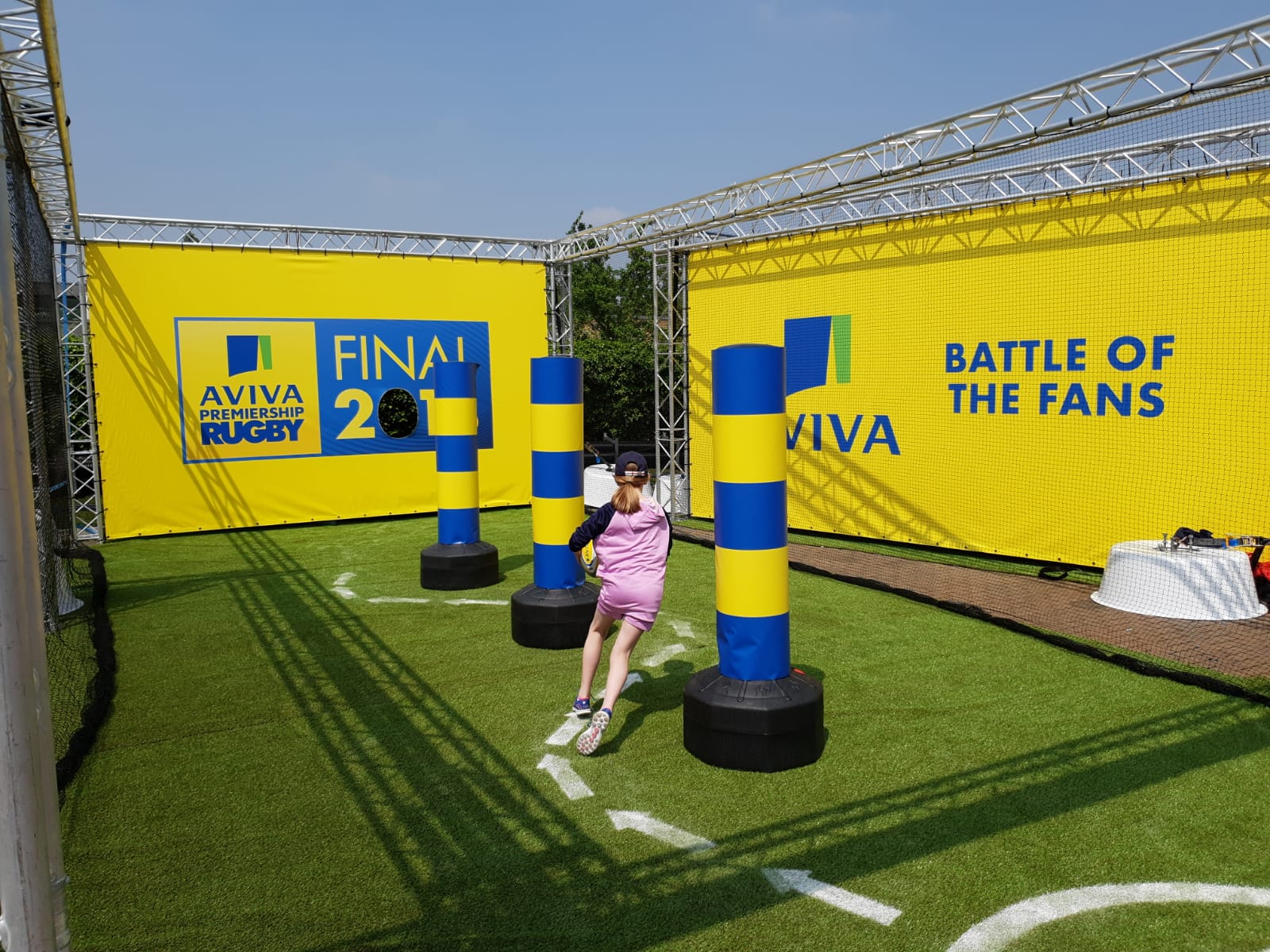 Back in late Spring, with Aviva Premiership Rugby’s two form teams going head to head in the 2018 final, the season ending spectacle was never going to be short of excitement, but what fans might not have expected was for the action to start long before kick-off, and even before they’d reached the stands….

As fans looked to make the most of the Aviva Premiership Rugby Final, they descended on Twickenham Stadium early to soak in all the atmosphere and make the most of a day at the rugby.  In days gone by, a burger and a drink would have been the only pre-match entertainment, however these days fan experiences are an integral part of the day’s entertainment at the world’s most popular sporting events. With many events aiming to broaden their appeal to a new generation of supporter, the emphasis of a day at a sporting event has shifted to engaging and entertaining before and after as well as during the on-field action.

With the sun shining and the anticipation building for the 2018 final, fans of Saracens and Exeter Chiefs could enjoy the Aviva Premiership Rugby fan experience, designed and constructed by sporting fan experience experts Provision Events (PVE) and CSM Live. The fan experience included Line-out, Agility and Scrum Challenges, a photo opportunity with the Premiership trophy and the ‘Battle of the Fans’ kicking simulator, which allowed fans to put points on the board for their favourite team.

Dominic Hayes, Commercial Director at Premiership Rugby was delighted with the response to the fan experience at this year’s final, stating: “To see so many fans getting so much enjoyment from the day, even before the match had started, was fantastic. We want supporters to have an amazing experience at the Premiership Rugby Final, and we think it’s vital that experience starts long before they take their seats. The activities that PVE and CSM Live created were inventive, exciting and most of all fun and we were delighted with the experience enjoyed by the fans.”

Thousands of people tested their skills on the challenges, proving that sports fans can’t resist the opportunity to get involved, as Simon Jones, Head of Sales & Business Development at PVE explains, “We create fan experiences at different sporting events across the globe and are never short of fans who want to test their skills and emulate the stars that they’ve come to watch. We were tasked with creating an experience at the Aviva Premiership Rugby Finals that would engage and entertain a broad spectrum of fans. So, to see budding juniors on the agility challenge, burly seniors on the scrum challenge and the huge number of people that put points on the board for their team on the ‘Battle of the Fans’ kicking simulator was hugely satisfying.”

Sarah Bate, Associate Director at CSM Live knows the value of bringing an event to life, but has seen a shift towards experiential activity being key to creating a great day out, concluding, “At CSM Live we have been bringing rugby to life for years, including the amazing work our team designed and delivered for the Rugby World Cup in 2015. However, more and more these days, we are helping brands and rights holders to engage with fans beyond the in-stadium experience. With inclusive activations that are fun for the whole family we help create memorable days out at the rugby.”

With the Aviva Premiership Rugby trophy now taking pride of place at the Allianz Park, the nation’s best will be planning on knocking Saracens from the top of the pile in 2019. And while the teams will do their best to make progress on the field, there will also be plenty of work behind the scenes to ensure that rugby fans’ enjoyment of the game continues to get better and better off the field as well.