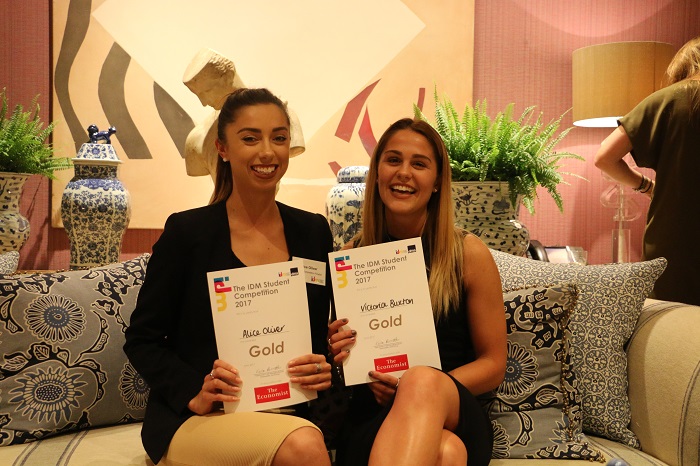 Last Thursday the winner of this year’s IDM Student Marketing Competition was announced at a gala reception in London’s Haymarket Hotel. The Be Heard team included Alice Oliver, Victoria Buxton and Sam Brooks, all students from Northumbria University and were presented with the Gold Award for their  response to the 2016 competition brief.

Team Be Heard was up against over 80 other competition entries, all putting forward their own marketing plan to The Economist. They were tasked with creating a campaign that would bring in new customers, but with a specific focus on increasing the number of women subscribers. They clinched victory after a live pitch against other finalists in front of the senior team from The Economist, Rachel Aldighieri, MD of The DMA and Joe Braithwaite, MD of Proximity.

Iain Noakes, chief customer journey officer for The Economist, this year’s sponsor, comments: “The standard of entries and live pitches this year was of a very high calibre. The teams that made it to the final shortlist and presented to us had an impressive array of creative ideas underpinned by solid strategic thinking. Ultimately, team Be Heard took first prize for their campaign thanks to its thoughtful response to the challenge we set forward in the brief, with the tactical thinking to deliver on their original idea.”

Mark Cripps, EVP, B]brand and digital marketing, at The Economist said: “The media industry is making great strides to increase its level of diversity, but there is still a way to go. The level of talent found in this year’s Be Heard winning all-female team shows that we will have a large pool of professionals to pick from in the future. The key will be for the industry to support their transition as they move up the career ladder.”

Kate Burnett, MD of DMA-IDM Employability, said: “Deciding the shortlist and then winner seems to get tougher each year, as the quality of the entries continues to rise. This year we were particularly impressed with the creativity, research, planning and overall strategies each of the teams had put onto their entries.”

Burnett continues: “Our mission at DMA-IDM Employability is to inspire young people to join the marketing industry and create clear pathways for them to do so. The Student Marketing Competition gives us a sneak peek at the next generation of marketing talent and judging by this year’s entries, the future of our sector is in safe hands.”

The IDM Student Marketing Competition is now in its 21st year and is part of the DMA and IDM’s joint Employability team. This initiative works with Higher Education organisations to give university students the chance to work on a challenging and real-life marketing brief, provided by the sponsoring client. The process offers students priceless, practical experience and, for the finalists, the opportunity to meet leading marketers and to win the top prize. The brief is also used by lecturers across the country as a valuable teaching aid on marketing and business courses.