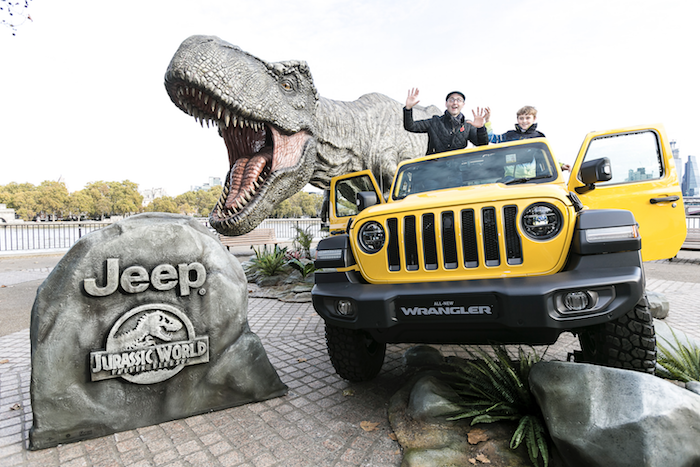 On Saturday 3rd November, London’s South Bank played host to a prehistoric surprise as the all-new Jeep Wrangler and Jurassic World: Fallen Kingdom came together for an interactive T.rex installation.

For one day only, the installation put the public and the all-new Jeep Wrangler inside the Jurassic World: Fallen Kingdom movie, to celebrate the release of the film on DVD and Blu-ray. A life-size T.rex was seen to be battling it out with the all-new Jeep Wrangler. It acted as an interactive photo opportunity for passers-by, who had the chance to climb in and get their picture taken with the T.rex in hot pursuit, in the rear-view mirror.

Promotional staff were around to invite consumers to have their photo taken with the all-new Jeep Wrangler. While waiting for their photographs, the public could watch a 60” plasma screen playing DVD extras, built into a Jurassic World style rock.

Hamid Habib, managing director, Starcom UK said: “This has been a fantastic campaign to work on and I love that we had the chance to give people the opportunity to experience being chased by a life-sized T.rex!”

Gurleen Oberoi, brand communications manager, Jeep UK said: “The scene pays homage to the original Jurassic Park movie from 1993 where the Wrangler proves to be the ultimate get-away vehicle.  Leveraging the authentic association with the Jurassic World franchise was the natural way to the launch the iconic but all-new Jeep Wrangler.”

Ian Cartwright, Co-CEO, elevenfiftyfive said: “It’s not every day you get to work with a 10m long x 4m high T.rex, whilst also being true to a brands values, as well delivering substantial reach via publicity and social sharing! It’s been great to work with Jeep, Universal, Starcom and Wild Creations to bring this all to life.”