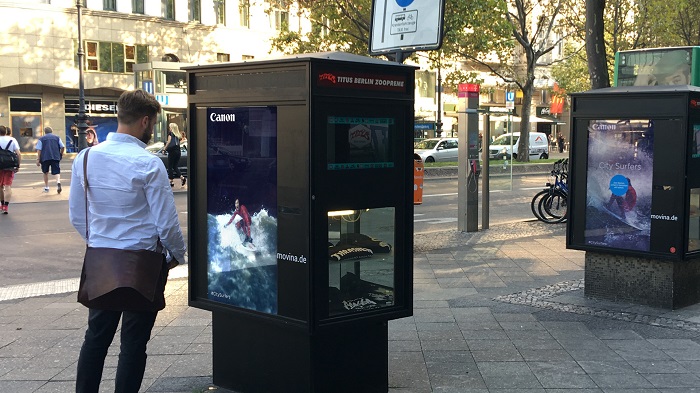 As part of Canon’s “Come and See” series, Canon is launching City Surfers, an expansive Pan-European campaign aimed at highlighting the virtues of real image quality at moments where it truly matters. As part of the integrated push, a month long Digital Out of Home activation is kicking off in Germany, across mall, rail and roadside environments. The UK and France follow suit on 26th September, in a push that will span 1,500 screens and includes two interactive dominations.

Produced by Grand Visual with creative direction from J. Walter Thompson, the DOOH campaign follows three thrill-seeking city surfers as they descend on Munich city centre to ride the standing wave at the Eisbach brook. The stunning Canon-quality camera footage, shot at night on the fast-flowing river, is followed by the call to action to discover more about Canon products.

Specially shot 180° film footage also provides a unique interactive experience built by Grand Visual, using touch-screen and gesture technology. Consumers can explore the film by scrolling, swiping and clicking, in a similar way they would on a smartphone, plus interactive hotspots provide further information on Canon products and camera techniques.

City Surfers is the fifth story in the Come & See series created by JWT London. The DOOH activity was planned and booked by Talon and PHD Media Worldwide and supports a broader digital and mobile campaign rolling out across EMEA markets this month, based around the central online hub.

Lee Bonniface, marketing director, EMEA region at Canon Europe, said “We’ve been able to portray some fascinating and inspiring stories as part of our Come and See brand campaign and we’re proud to bring our latest story to life in an even more engaging way. For the first time, consumers will be able to see and feel the true benefits of using a Canon camera through their smartphones, while exploring the incredibly exciting world of City Surfing. We want to put consumers in the driver’s seat, enable them to view the scene and story as it is told and learn about Canon’s superior imaging quality in the process.”

Dan Dawson, chief creative technology officer at Grand Visual said: “DOOH is the perfect medium for displaying the stunning Canon-quality video footage. By combining the scale and impact of out-of-home with technologies that allow for more immersive, hands-on interaction, DOOH can provide a deeper more memorable level of engagement.”

Nolwen Rivet, associate director at PHD Media Worldwide commented: “The flexibility and ubiquity of DOOH inventory in cities around the world make it a valuable and exciting medium to work with. City Surfers combines the more personalised experiences of interactive DOOH and mobile comms, with the public scope of a multi-market digital display campaign on a grand scale.”