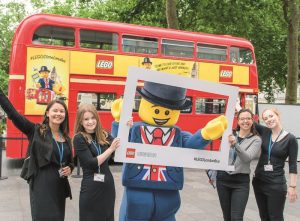 Promohire were appointed by agency Norton PR to help with a campaign for The Lego Group. The brand had planned an exclusive launch for their new product – the Lego Creator Expert London Bus which went exclusively on sale at The Lego Leicester Square store on 1st July 2017. To celebrate, Promohire provided a life size Lego branded Routemaster bus for the campaign.

The event involved parking the Lego Routemaster bus near to the flagship store in Leicester Square, which was a focal point for fans of all ages. Promohire supplied the bus, and printed and installed the external bus branding. As part of the creative brief, Promohire also customised the top deck to provide a social media and influencer content studio for the launch day.

A Facebook Live presentation of the Lego London Bus – led by the designers of the set; Morten Graff-Wang (Senior Designer) and Jamie Berard (Design Manager) – took place on board the bus, followed by interviews with high profile influencers with links to the AFOL (Adult Fan Of Lego) community.

Visitors to Leicester Square could join in with the celebrations throughout the day, which included a Lego London Bus mosaic build. Additional consumer engagement initiatives included a photo competition with Lester, the Lego Leicester Square Store mascot. Donning bus themed props and accessories provided, people could take pictures of themselves with Lester and upload them to social media during the day with the chance to win a Lego London Bus Set.

The Lego Creator Expert London Bus features a wealth of authentic details – from the distinctive lines and curves of its bright-red bodywork, to its specially made standard-tread tyres and destination sign.