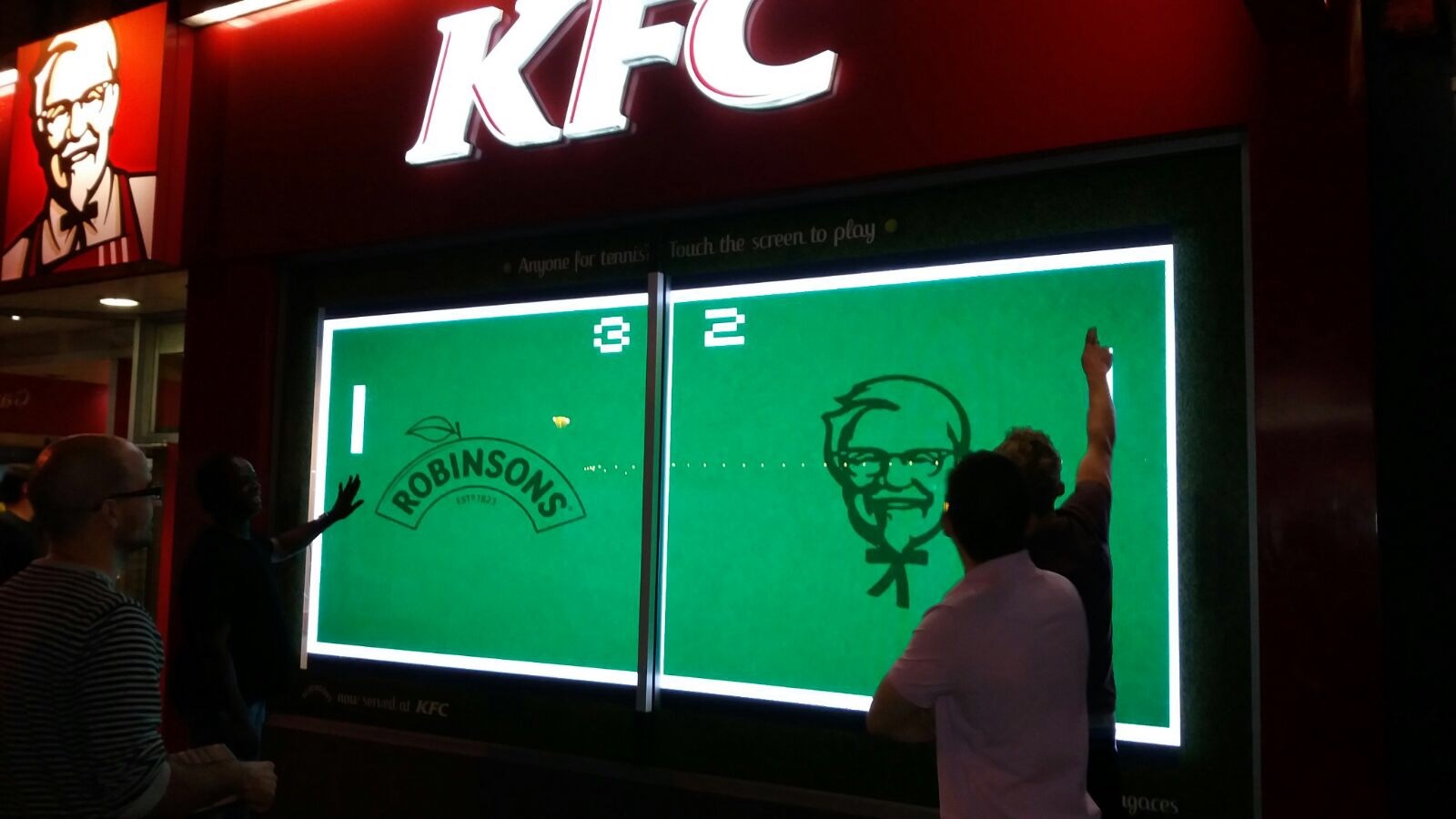 Robinsons have enlisted the help of Savvy to take over KFC Wimbledon during the famous tournament to delight tennis fans on their way to the match.

Using innovative technologies, the window itself is transformed into a touchscreen; with a simple tap on the window the game is activated and players control their pong paddles directly by simply touching the window. When the game isn’t being played, the screen serves as a medium to advertise the two brands side-by-side at the very point of purchase, driving awareness of Robinsons in KFC and encouraging sales conversion. The campaign also includes a national sampling plan touring six major cities as well as key London spectator stations and a bespoke Colonel’s Club competition to win Wimbledon Final tickets and over 100 Fitbits.

With 10.5m people engaging with Wimbledon through social media, Savvy is involving Robinsons and KFC in the conversation using #servingaces. There are a number of posts from KFCs Facebook page driving awareness of the fact that Robinsons is now served in KFC, as well as driving footfall to key sampling events, and giving fans access to exclusive prizes.

Savvy’s account director Kim Jacks says: “With the challenge of bringing together two rather different brands to deliver a clear consumer message, this has been one of our most ambitious campaigns to date. To realise it we brought together a bespoke team of event planners, creatives, technologists and social media strategists to ensure we implemented something hugely impactful that delivered for both brands.”

Senior National Account Manager at Britvic, Grace Drew comments: “With such a focus on sugar reduction, it’s great news for all that Robinsons is now being served at KFC. We’re really excited by the campaign, especially the interactive screen which is a first for both brands and is sure to stop people in their tracks! Overall this is a great dual-branded campaign which not only grows awareness but also drives footfall back into KFC, delivering incremental sales.”

Charlotte Adams, Brand Manager at KFC UK & Ireland said “We’re really pleased to be working with the Britvic brands. This is our first piece of marketing activity for Robinsons and we’re really excited by it – it’s a great campaign that we’re all hugely proud to be a part of.”

The Robinsons KFC campaign kicked off on 26th June and will run for the duration of the Wimbledon Championship until 16th July.