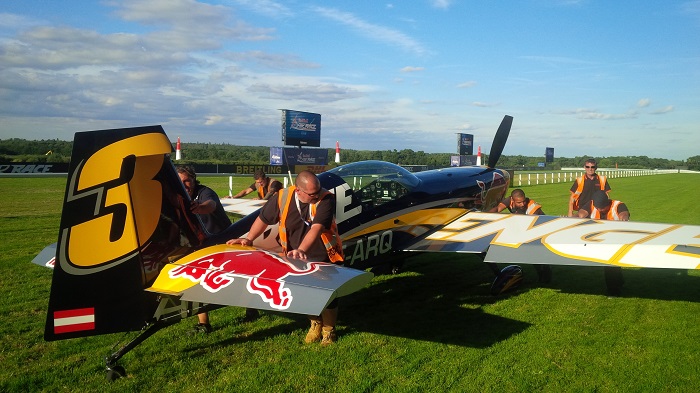 Showforce was appointed to provide experienced crew, transport and plant drivers to the Red Bull Air Race when it was held at Ascot Racecourse in August.

Working directly for the Red Bull Air Race organiser, Showforce delivered in excess of 200 crew shifts over a three-week period. The crew were predominately engaged in the construction of temporary hangers that house the competing aircraft for the event. Every pilot and team are supplied with their own hanger which includes a workshop and rest area. Tasks included: building truss; installing modular sections that join together using the forklift; erecting the roof and wall skins; anchoring the structures; laying floors and fitting out furniture for the flight crew and beds for the pilot.

In addition, the crew assisted with installing inflatable course markers, general signage and supporting Riedel, who were responsible for installing networks for video, audio and communications for the event.

Chris Martelly, Showforce’s operations director comments: “This is a great event to be involved in – there are large numbers of crew onsite, carrying out a variety of tasks. They work directly with the Red Bull Air Race’s organising team, at every stage of the build, race and de-rig, to ensure that all aspects of the event run smoothly. In March of this year we provided crew for the Abu Dhabi leg of the race series, it’s the perfect example of how we can deliver major event organisers with global continuity.”

The Showforce team was onsite from 2nd August until the 18th August, with crew deployed during the event for pushing the planes back to their hangars and then de-rigging the hangers once it came to an end.