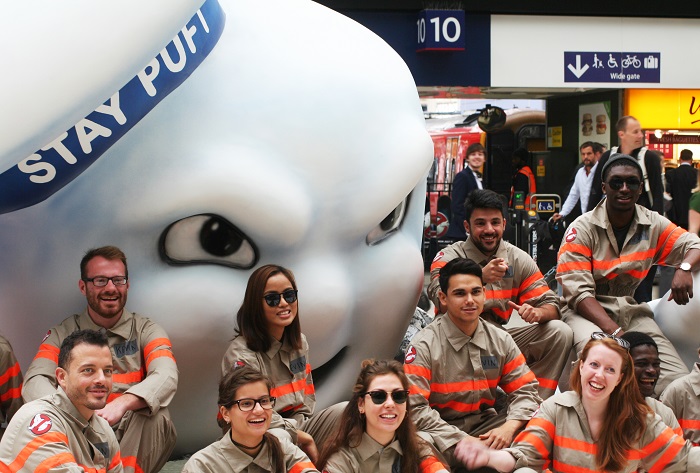 A super-sized spooky Out-of-Home campaign has been launched by Sony Pictures with JCDecaux. The event sees Waterloo Station transformed into a film-themed showcase for two weeks to promote  the release of the new Ghostbusters film.

The campaign activity is augmented with a variety of global media-firsts debuting at the Waterloo Station spectacular.

Eight meter ‘Slime Poles’ have been placed around the station, and a giant sculpture of the ‘Stay Puft’ Marshmallow Man can be seen smashing through the concourse floor. Commuters are encouraged to capture a picture and share on Twitter using #ghostbusterswaterloo.

An immersion zone in the station’s busy commuter tunnel has been transformed with New York vinyl wraps and atmospheric audio, including eerie snatches of sound from New York City.

Visitors have the chance to buy merchandise s at a pop-up Ghostbusters retail unit which has been built to look like a New York Subway entrance.  The retail unit is being run by the world’s largest and science fiction, fantasy and cult entertainment retailer Forbidden Planet.Visitors to Waterloo can purchase limited edition Odeon tickets and souvenir tins from the Ghostbusters retail store between 11 – 24th July.

Business cards are being given out to encourage commuters to call the Ghostbusters headquarters and hear a message from team. The number is also displayed on phone boxes across the UK. 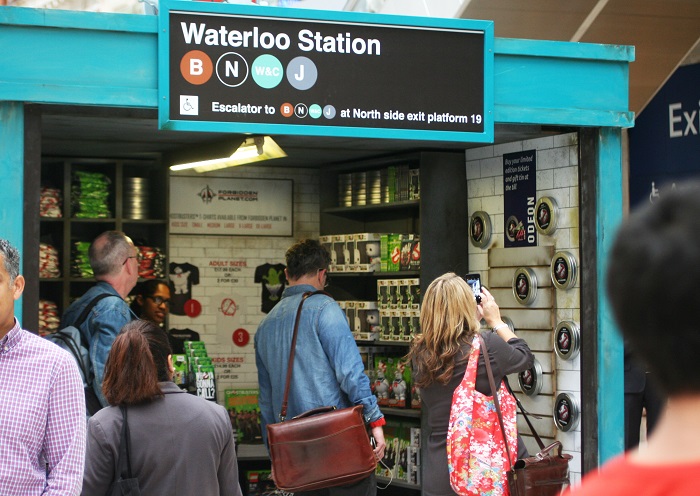 The campaign has been immersive across the JCDecaux media network from start to finish; with ‘Gostbusters Box Office Now Open’ messaging displayed across digital screens in malls and rail stations to drive early awareness.

The campaign concept was created, managed and executed by JCDecaux. The creative was handled by Feref and media handled by MGOMD and Talon.

Stuart Williams, deputy managing director and marketing director at Sony Pictures UK said: “We were very excited to work with the team at JCDecaux as a media partner for our campaign for the release of Ghostbusters in cinemas. We wanted to deliver more than a pure awareness outdoor campaign and give people the chance to experience Ghostbusters for themselves and be part of the excitement. Our campaign with JCDecaux has achieved this on many levels using a range of the outdoor opportunities on offer across a variety of digital screen formats, phone boxes and culminating with our takeover of Waterloo station from July 11.  This will give people the chance to have a truly immersive experience, buy merchandise and purchase their cinema ticket too.  The activity covers experiential, media, digital, publicity and merchandising and is a critical part of our release campaign to make Ghostbusters the film event of the summer.”

Stacey Knight, director of JCDecaux Blue said: “Waterloo station is the perfect location to create memorable experiences for commuters. The team at JCDecaux had a lot of fun coming up with the creative ideas for the Ghostbusters campaign. A massive Stay Puft man, slime all around the station and fake news stories will no doubt deliver huge excitement and buzz around the film. I’m sure there’ll be a few WaterBOO! commuters putting on a brave face saying: ‘I ain’t afraid of no ghost’.”

Robin Behling, chairman at Feref said: “This incredible canvas allows us to really push the boundaries of creativity.  Everything is big – but it has to be when working in such a large environment. This is its strength. We can bring moving image, sound effects, 3D sculptures and retail all into one concept. There’s nowhere else like it; nowhere else we can showcase Ghostbusters on this massive scale to such a vast audience.”

Emily Hyne, Client Director at Talon said: “This is a hugely exciting release for Sony Pictures, so it was imperative that our OOH execution was able to bring this to life in a real world environment.

Featuring the giant Stay Puft man alongside Ghostbusters branding and characteristics at Waterloo will add something unique to one of the busiest Rail Stations in the UK. This is supported by a network of National Phone Kiosks and numerous high profile DOOH locations adding incredible impact and awareness for this very exciting release.”