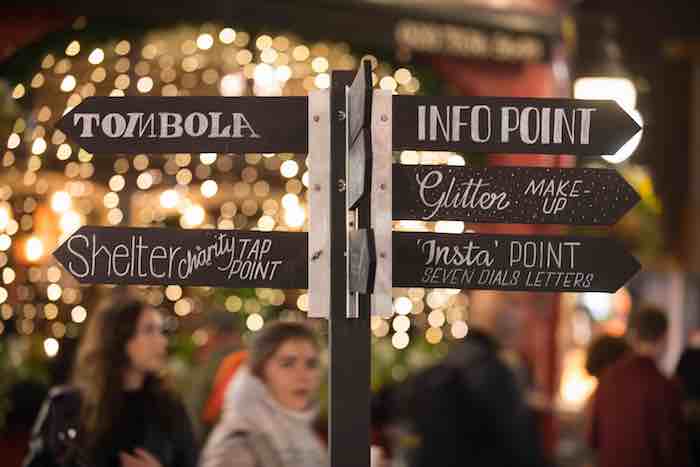 Seven Dials welcomed thousands of visitors on 14th November to celebrate the atmospheric West End village’s annual Christmas lights switch on, and officially inaugurate the festive season. Both the lights and the evening’s Christmas activities were based around the theme a ‘Starry Night’, held in aid of the housing and homelessness charity Shelter.

Visitors were treated to an unveiling of the 2019 Christmas lights installation, featuring over 650 giant stars across the seven interconnecting streets, in a nod to the fact that sleeping under the stars is still a harsh reality for thousands of people living on the streets of England and Wales.

In a UK first, the unique lighting decorations interact with a donation point for Shelter on Earlham Street, which allows the public to simply tap their bank cards to donate £3 directly to the charity. Upon receiving the donation through the tap point, stars at each entrance to Seven Dials twinkle to create a special immersive sequence of lights.

On the night, Shaftesbury also unveiled ‘Boutique by Shelter’, an exclusive charity pop-up shop at 72 Neal Street offering designer, vintage and quality high street clothing at a fraction of the original price, also raising funds for the charity.

Complementing the annual lights switch-on were a number of experiential indoor and outdoor Christmas activities, such as wreath-making, eco-friendly glitter make-overs, roasted s’mores and live music from the House Gospel Choir. Each of the streets within the unique estate remained traffic-free throughout the evening to ensure safety and freedom of movement for the festive celebrations, while also encouraging footfall in and around Seven Dials stores.

Other Seven Dials stores, including Diesel, Away, Nappa Dori and Tatty Devine, offered bespoke Christmas personalisation services and special discounts to visitors throughout the evening.

Karen Baines, head of group marketing & communications at Shaftesbury, Seven Dials says: “We are thrilled to officially launch Christmas in Seven Dials with this interactive light installation, and even more so in aid of such an important cause. With a fantastic soundtrack and over 60 local retailers and restaurants taking part, the event created a fun-filled evening, whilst also helping to kick-start funding throughout the festive season for all those supported by Shelter.”

Polly Neate, CEO of Shelter says: “While Christmas for many is one of the most magical times of the year, it can be an increasingly cold, difficult and dangerous period for the millions of people across the UK struggling with bad housing and homelessness. With the help of the public’s unwavering generosity and support, we’re thrilled to be able to light up the streets around Seven Dials with our one-off pop-up shop, which will make a real difference to the lives of those less fortunate at this time of year.”

From now until early January, visitors can enjoy Seven Dials’ interactive Christmas light installation, and make a contribution to Shelter at the Earlham Street charity tap point and ‘Boutique by Shelter’ pop-up shop.