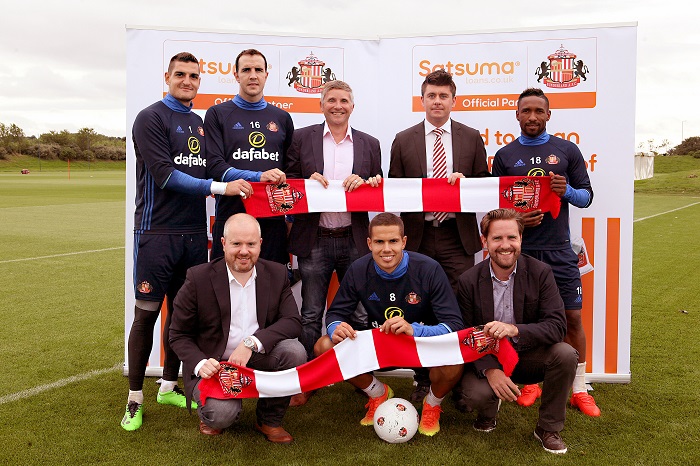 Satsuma Loans has appointed Leeds-based marketing agency Banana Kick to activate its new partnership with Sunderland AFC ahead of the 2016/17 Premier League Season.

Banana Kick will deliver sponsorship activity on behalf of Satsuma Loans across physical and online platforms, including Fan Zone activities on home match days, and dedicated social media channels. On match days, The Satsuma Arena will feature games including Football Pool and a ‘Keepy Uppy’ Challenge, while there will also be the opportunity to compete head-to-head on the latest football video games and enjoy performances from some of the UK’s top football freestylers.

The action in the Arena will be complemented by activities on the field at half-time and around the stadium, including giveaways and branded photo boards.

Throughout the partnership, Satsuma Loans will be working with local organisations towards helping them better serve the communities around them.

Satsuma Loans sponsorship manager, Paul Mitchell said: “We are delighted to be once again working with Banana Kick towards maximising the mutual potential of this partnership.

“Satsuma Loans understands that supporters are the lifeblood of any club and that clubs are often the hubs of their communities, which is why we believe we are the perfect fit as a partner of Sunderland AFC.

“We also understand the privilege of being associated with a club of such illustrious standing in English football and look forward to the start of a fruitful relationship in the months ahead.”

Banana Kick head of sponsorship, Rob Singleton said: “We are thrilled to be building on our already fantastic partnership with Provident and Satsuma Loans by activating their partnership with Sunderland AFC.

“The opportunity to work at the very top level of club football is one we will relish as an agency, and we look forward to helping Satsuma Loans and Sunderland realise the full potential of the partnership.”