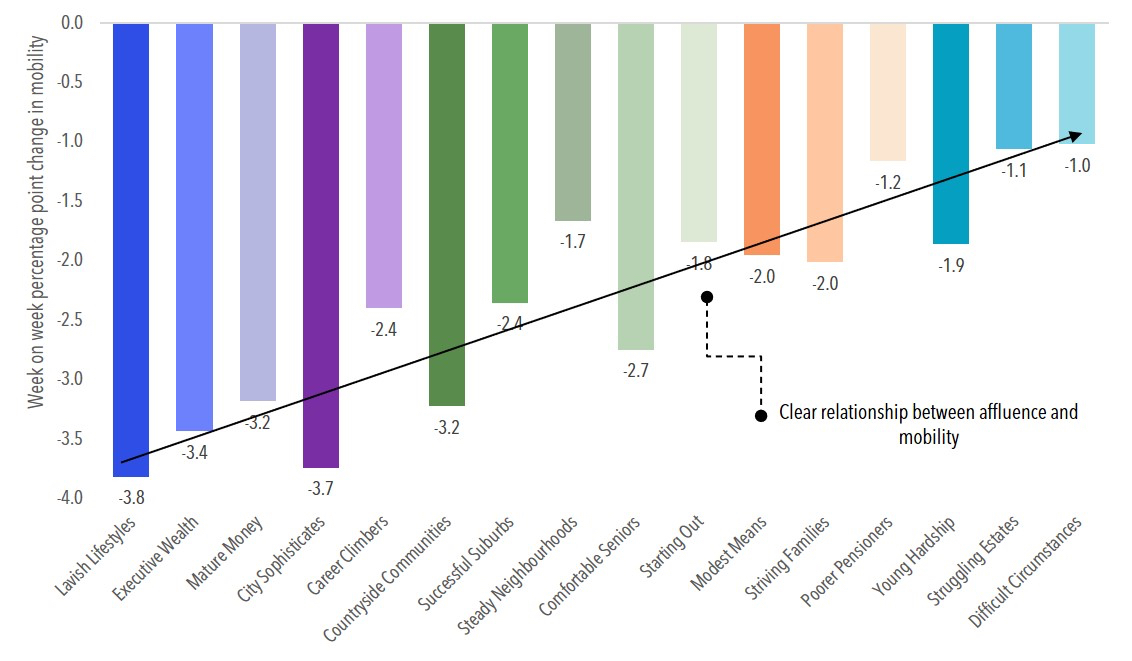 The latest movement of people data from CACI and its partner, Location Sciences, suggests that, contrary to the image widely portrayed, the difference in the impact of Covid-19 on consumer behaviour is increasingly based on demographics, rather than geography.

Insight from the week ending October 4 shows mobility across the UK dropped two percentage points to 76% of pre-covid levels, but this hides significance differences across the country.  While regional variations suggest geography is the key factor, with big drops in Wales (8pp), Scotland (4pp) and Northern Ireland (3pp) following the introduction of tighter restrictions, the differences in movements are more significant when the data is analysed demographically.

According to CACI, the wealthier consumer groups in the UK have seen the biggest reduction in their movements.  Lavish Lifestyles, for example, the most affluent of CACI’s Acorn profiles, have seen a reduction of almost 4pp compared to the previous week.  Similarly, urban-living City Sophisticates experienced a 3.7pp drop.  Such consumers typically live in places that have everything immediately to hand, or have jobs that allow them to work from home more easily.

Conversely, the less affluent demographic groups tend to be employed in key worker roles, manufacturing and other sectors that mean they have no choice but to continue to leave their homes to work.  CACI’s Struggling Estates Acorn group, for example, experienced just a 1.1pp decrease in movements nationally.

Alex McCulloch, Director of CACI, said: “Most of the cities across the UK with the highest infection rates all have above average proportions of the less affluent consumer groups.  This creates the false impression there is a geographic north-south divide in the UK.  In reality, however, it is affluence, and the ease with which people can limit leaving home as a consequence, that is having the most significant impact.

“The picture emerging is less about people being unable to stop socialising, and much more that large proportions of the UK’s population have no choice financially but to put themselves at risk of contracting Covid-19 in order to earn a living.”

Looking beyond the demographics, CACI’s analysis has also revealed the building negative impact of the Rule of Six and 10pm curfew, with mobility declining by 6pp since it peaked at 82% of 2019’s levels of mobility three weeks ago.