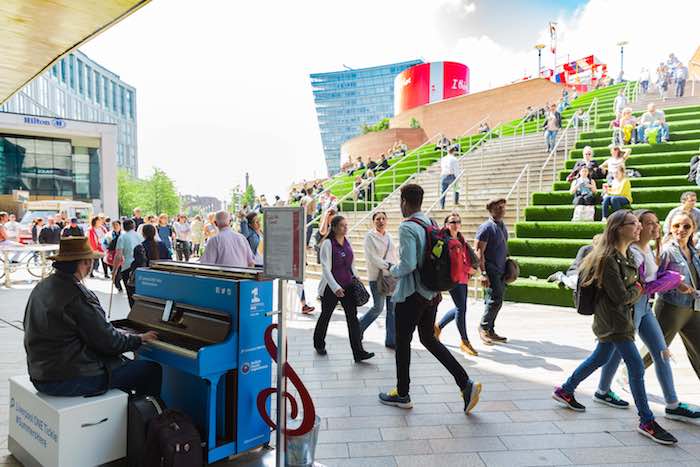 Grosvenor Europe , one of four operating companies of the privately-owned international property group, Grosvenor Group, and developer, co-owner and asset manager of Liverpool One, has marked the award-winning destination’s tenth anniversary with the publication of analysis of Liverpool One’s socio-economic impact.

The Grosvenor Group has a portfolio of property in over 60 cities around the world; Liverpool One is an exemplar of the positive outcome that Grosvenor’s long term commitment and active management can deliver to a city.

In the ten years since Liverpool One opened in May 2008, which coincided with Liverpool’s year as European Capital of Culture, the destination has:

Further analysis by Grosvenor Europe, has revealed Liverpool One has welcomed 301 retailers and restaurants totalling almost 2.3 million sq ft (including repeat lettings), an area 323 times the size of the football pitch at Anfield. This includes 84 international brands, as well as 36 that were firsts for the North West upon signing. Correspondingly, footfall and sales in Liverpool ONE have increased by 53% and 110% respectively in the last ten years.

As well as its contributions to the local economy, Grosvenor has donated £2 million to the community via the Liverpool One Foundation, an enterprise set- up before Liverpool One opened to provide support to community projects across the city region. The Foundation has directly assisted 339 community and voluntary projects and an estimated 380,000 people, the equivalent of one in six of the Liverpool City Region’s population. This is in addition to a £2 million endowment that has built up over the same period.

Commenting on the positive effect of Liverpool One, Miles Dunnett, director, Portfolio Management, Grosvenor Europe said: “From the outset, our goals for Liverpool ONE were to reinvigorate Liverpool’s retail and leisure offer, create a connected mixed-use destination that local residents could be proud of and, overall, to deliver lasting commercial and social benefits to the Liverpool City Region.

“We recognise that Liverpool One wasn’t just about property investment but also the economic and social turnaround for the city. Our commitment and determination to deliver this promise has exceeded all expectations and we are extremely proud to have helped achieve great things for Liverpool over the past ten years. Our focus moving forward is to leave a lasting legacy for the city and are continuing with our long-term investment in Liverpool One.”

Liverpool One has played a key role in the 66% increase in the Liverpool City Region’s visitor economy, the value of which has risen from £2.73 billion to £4.53 billion, equivalent to an average growth of around 6.5% per annum. The number of visitors to the city increased from 52.3m in 2009 to 64.2m in total by 2017, resulting in Liverpool ranking in the top five retail destinations in the UK.

Steve Rotheram, Metro Mayor of the Liverpool City Region, added: “Liverpool City Region has many reasons to celebrate the last ten years, not least of which is Liverpool One. It has transformed the city centre of Liverpool, making it the envy of many across the UK and overseas. Together with the outstanding work that has been done to reinvigorate the city’s rich cultural heritage, boost tourism, and drive inclusive growth in the local economy, we can all be proud of what has been achieved for Liverpool City Region in the last decade and look forward to what the future holds.”