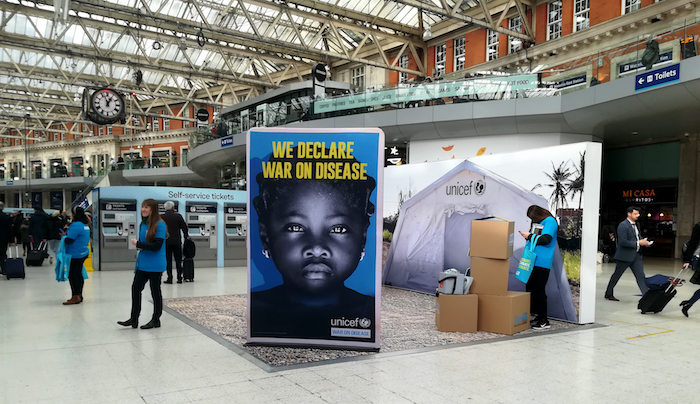 On the 28th October, as part of their mission to ensure every child in the world is vaccinated, Unicef have launched a campaign at Waterloo station to recruit commuters in the War on Disease.

This interactive activation took place throughout the day at London’s busiest station, which receives around 2.3 million visitors per week. Its aim was to spread the word on the importance of vaccinating against preventable diseases, which kill around 7,000 children under the age of 5 every day.

Commuters were encouraged to take their photos in front of the ‘Vaccination Tent’, designed and installed at the station by CSM Live, holding a #Warondisease sign. The tent acts as a visual representation of the vital work Unicef do every year, vaccinating almost half the world’s children.

Photos were taken on the ‘Snappie’ app and volunteers encouraged people to share them on their social media. Content from the campaign also featured on the station’s 15-metre digital screen, increasing the reach of the powerful message.

By encouraging involvement through this activation, Unicef aim to get the Prime Minister to publicly commit to prioritising the health of children across the world in the lead up to World Children’s Day on 20th November. Through this experience Unicef is recruiting participants to “Join the resistance”, and those that sign up will be sent a special mission each day for the next week to build support in the fight against this deadly enemy.

Jess Shimwell, who managed the activation for CSM Live, “We feel very proud to have worked on this activation with such a fantastic charity. Unicef do such vital work to help vaccinate children across the globe every year, and it was great to raise awareness about this cause through this interactive campaign.”