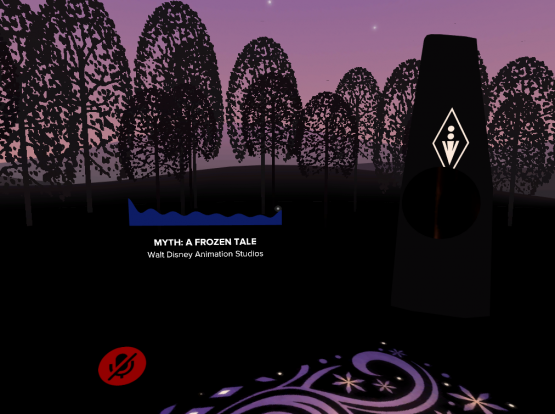 Whilst the who won what will be a burning question for many, the occasion itself was an interesting one for virtual event builders. AIXR used VR Chat, a gaming platform available free to download via Steam as its host environment. Once signed into the VR Chat World, attendees could enagage and interact with the awards presentations, select an outfit for a robot avatar and use networking rooms to chat with others. FMBE’s Frank Wainwright was one who attended the press preview event, getting a chance to explore the hosting format.

As the the results…

Walt Disney Animation were awarded Film of the Year for their captivating submission – Myth: A Frozen Tale, which took viewers on a visceral journey into a stylised world inspired by the environments, themes, and elemental spirits from the world of “Frozen 2.” Beautifully filmed, it applied the very latest techniques in real time technology and combined CG, traditional animation, and spatial sound to fully immerse the audience in the story.

For the second year in a row, London-based FundamentalVR received the Healthcare of the Year Award after launching a new education mode for their surgical simulation platform. Their efforts in enabling redeployed nurses and doctors to learn how to operate ventilators (in less than 30 minutes) under the direction of an intensive care consultant to try and combat issues they were seeing with training during the early days of the pandemic is laudable. In addition, the technology has enabled surgeons and trainees to continue to practice and learn new skills anywhere – an essential feature during COVID-19.

Continuing to push the boundaries of science and aid remote learning, MEL Science secured the Education and Training Award for their quantum level simulation engine that enables students to zoom down to a microscale to experience atoms and molecules for themselves and interact and play with them. The judges said it had to be seen to be believed – with the attention to detail and interoperability a particular stand-out. With 50 lessons so far available, mapped to US and UK curricula, there’s more to come from this provider as teachers & pupils begin to construct their own lesson simulations within the programme.

Previous winner Valve upped the ante this year and secured a double-win on the night – the VR Hardware of the Year Award for Index, its first virtual reality headset developed and manufactured in house and the Game of the Year Award. Critically acclaimed, Valve’s HalfLife: Alyx blew away competition from likes of Sanzaru Games’ Asgard’s Wrath, nDreams with Phantom: Covert Ops and The Walking Dead: Saints & Sinners from Skydance Interactive.

Other notable winners include:

Daniel Colaianni, AIXR CEO commented: “Last night was an extraordinary celebration of the advances made in virtual reality across what has been a highly unusual twelve months. Despite the constraints that COVID-19 has presented, it is evident that innovation and progress in delivering virtual reality to all has not been hindered – in fact it’s use has risen and been applied in an astonishing array of manners – from keeping people connected to training redeployed medical professionals to save lives.

“We were delighted to be able to return the favour and reward the high standards presented by delivering the ceremony in true VR style – a world-first for an awards ceremony. Throughout the evening, our digital guests were treated to a fully immersive state-of-the-art VR experience complete with pre-programmed and live-streamed content. They were also able to enjoy networking opportunities, and experience the ceremony by being transported into bespoke virtual worlds created exclusively for the awards. To be truly immersed in every submission by all exemplary VR Award nominees means to truly understand the gravity of their accomplishments in the industry. The evening finished off with an after-party with a live DJ set to play the guests out into the evening.”