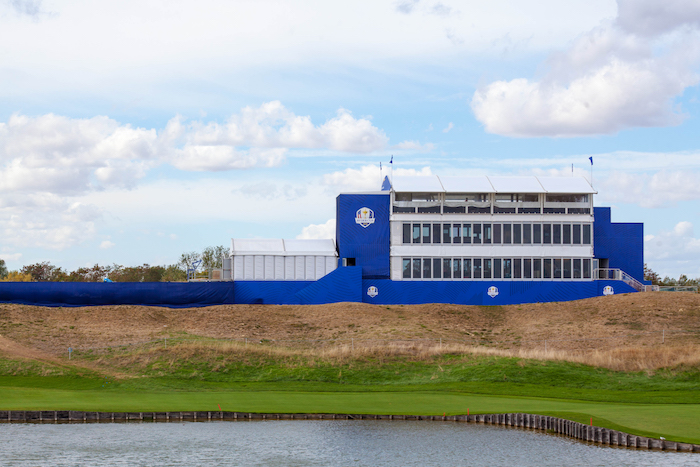 Arena is to deliver turnkey event services for event infrastructure including scaffolding, structures and furniture at The 2018 Ryder Cup, held between 25-30 September at Le Golf National, Paris. It will be the eighth time Arena has provided its services to The Ryder Cup.

Arena Scaffolding delivered the first of 180 trucks of equipment in April, making it the first major contractor on-site to begin the installation of 11,000m² of substructures that sit under the wide range of temporary structures supplied by Arena and GL Events. The complex project, overseen by Willy Irish, MD of Arena Scaffolding, also saw the installation of temporary bridges, scoreboards, branded walls, the media screen support and staircases.

Since the initial construction began in April, Arena Scaffolding has installed an extensive range of temporary event infrastructure to create a truly memorable Ryder Cup for organisers, players, partners, broadcasters, guests and the public.

Edward Kitson, match director for The 2018 Ryder Cup said: “Taking The 2018 Ryder Cup to France for the first time, it was fantastic having trusted suppliers like Arena on board. They have given us the confidence to create an event environment that surpasses anything people have seen before and that reflects the excellent quality of competitive golf anticipated around the world.”

Spaceworks and Well Dressed Tables were the last of the Arena divisions on course with event furniture and tableware deployed across multiple hospitality venues and the public village, including the outdoor ‘jardin’ furniture. Spaceworks delivered furniture for all the venues including the GL Events structures.

Grahame Muir, CEO Arena UK & Europe, said: “It has been a pleasure working with the Ryder Cup and extending our excellent working relationship. Our expanding capability to deliver the full service event offering was highlighted by Arena Scaffolding, (acquired by Arena Group since the last Ryder Cup), being used at every temporary venue on Le Golf National. We always want to be pushing boundaries, so it’s great to break records with France’s first triple decker hospitality on a scaffolding sub-structure and deliver an incredibly high standard of event venues with beautiful interiors.”