BMWi has taken over Berlin with help from brand experience agency TRO as 6 races conclude the Formula E season at the German capitol’s old Tempelhof airport.

Regarded as a home Grand Prix by team BMWi Andretti this celebration of electric racing is also providing an electric brand experience centred around a large drive in screen, the Carrona cinema. 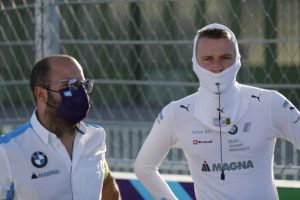 The screen, which is showing all of the live action, is being used to entertain passengers in two convoys of BMWi vehicles that wend their way across the city to get there, taking promotional pitstops along the route and completing challenges, including a Sounds challenge and a racing simulator where they take on Alexander Sims and Max Günther, the teams two lead drivers.

Called Berlin Electrified the two convoys are allied to teams of brand influencers, one representing e-Sports and one representing Sounds. The team members are busy supporting the event whilst fans can choose their convoy allegiance via hashtags #BMWiConvoySounds or #BMWiConvoyEsports. 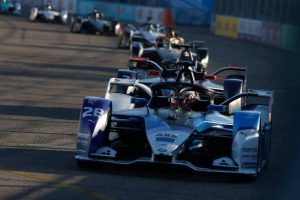 The BMWi team went into the week confidently with both drivers and the team contending for season title glory though the first two races have seen patchy results for the home racers. Reacting to a poor showing in Race 7, the second of the 6 races at Tempelhof Team Principal Roger Griffith expressed his disappointment that good speed in practice had not translated into race day pace, saying. “We must use the time between now and the next race to analyse closely what we can do better.”