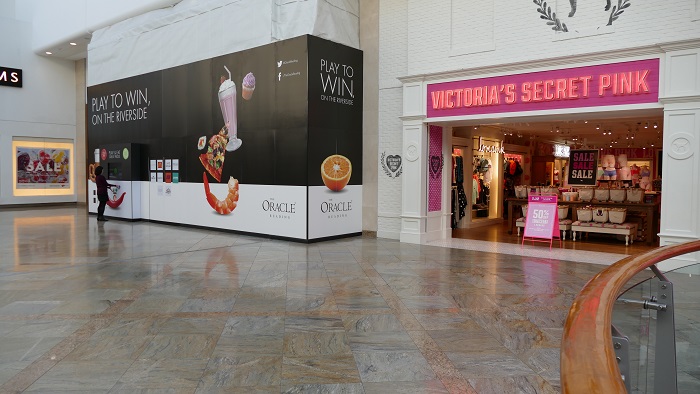 As part of their ongoing Riverside redevelopment, The Oracle tasked NexusEngage with driving footfall to their restaurants in a fun and innovative way whilst also taking advantage of an empty retail unit.

Following Play to Win’s previous success at West Quay, NexusEngage brought the activation to Reading’s largest shopping centre. The empty retail unit has been transformed into an interactive experience which allows shoppers to win vouchers to be used in the centre’s restaurants, bars and cafes.

The store front grabs the attention of shoppers passing by with a large vibrant design featuring the restaurant’s logos and the call to action to ‘Play to Win’. Music coming from the activation and a queue of people watching and waiting to play also help to bring a buzz to the game.

In order to win, players must match the colour shown on the screen with the corresponding button below the screen. The more colours the player matches, the quicker the game becomes, allowing players to score more points.  The prizes are distributed at random, ready to be redeemed at one of The Oracle’s eateries.

All Bar One, McDonald’s, Café Rouge, Bella Italia, Pizza Hut, Wagamama, Yo Sushi!, Jamie’s Italian, Miller & Carter Steakhouse and TGI Friday’s are all taking part in the activation which launched in early January and is seeing over 430 plays per day on average.

Debbie Hastings, commercialisation manager at The Oracle comments: “The current Play to Win activation in The Oracle is extremely popular with shoppers, it is also generating a great deal of interest on social media with over 230 people commenting, liking and sharing a video we posted of the game on Facebook.

NexusEngage has delivered a creative campaign that drives revenues within the centre with an exciting and innovative campaign. We are very happy with the results so far and can’t wait to find out the redemption rates of the vouchers at the end of the campaign!”