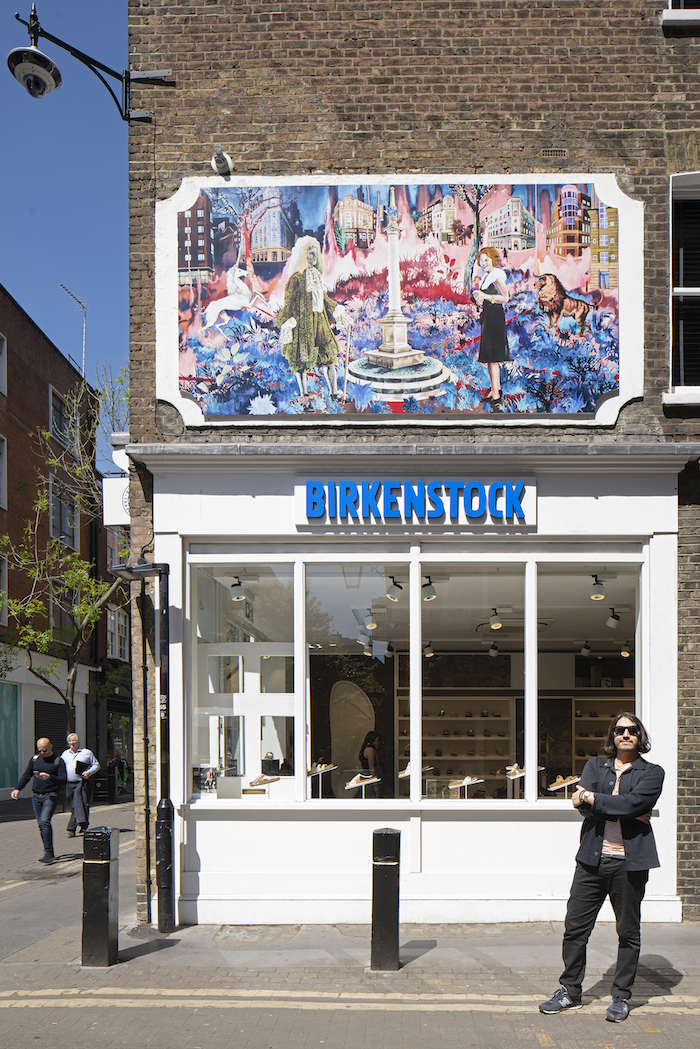 Seven Dials has officially announced the next installation for its community initiative, The Artist’s Artist Project, which sees an ongoing series of public artworks exhibited in the unique West End destination, before being donated to selected charity partners.

Displayed on Shorts Gardens, the latest work by Rene Gonzalez is titled At the Entrance of Seven Obscure Passages and pays tribute to the 30th anniversary of the neighbourhood’s iconic Sundial Pillar and the conservation efforts of The Seven Dials Trust, while conveying the area’s wider history and sense of discovery.

The work takes the place of The Evolution of Agatha Christie, by British artist Iona Rowland, which was inspired by the literary icon’s novel The Seven Dials Mystery and will be auctioned with all profits to go to UK women’s charity, The Fawcett Society.

Each installation for The Artist’s Artist Project is interconnected, with the showcased artist nominating another for the following installation. London-based Rene Gonzalez was one of three artists put forward by Iona Rowland, whose piece was then selected by a panel of Shaftesbury representatives and Seven Dials stakeholders.

Rene brings his signature aesthetic of ‘magical realism’ to the piece, using acrylic paint on raw canvas to depict the iconic Sundial Pillar, and capture the architecture and evolution of Seven Dials since its establishment in the 17thcentury. Key historical figures are also present in the piece, including Thomas Neale who designed the estate, and Queen Beatrix of the Netherlands who unveiled the reconstructed monument for The Seven Dials Trust in 1989.

Commenting on The Artist’s Artist Project, Rene Gonzalez said: “When I lived in Costa Rica, I was a mural and graffiti artist so I’m very aware of how art in public spaces reflects and transforms a community’s identity. After working in fine art for many years in London, it’s a privilege to be commissioned for this project and be given the platform to show viewers a glimpse of Seven Dials from my perspective – a mythic place filled with enchantment, secrets and mysteries.”

Karen Baines, head of group marketing and communications at Shaftesbury said: “The Artist’s Artist Project is a great example of our commitment to bringing diversity and meaning to the experience of Seven Dials – for visitors and locals alike. Rene Gonzalez’s artwork was a standout choice in the way that it marks the Sundial Pillar’s 30thanniversary, and it will add another element to the sense of discovery across the village. We’re excited to develop this new initiative, allowing us to regularly work with emerging talent in enhancing the public realm whilst remaining true to the character of Seven Dials.”

David Bieda, chairman of The Seven Dials Trust added: “Seven Dials is steeped in history and, alongside Shaftesbury, we aim to illuminate the area’s fascinating past for visitors, residents and businesses alike. To have continual public artworks displayed no Shorts Garden not only maintains the long-held creative spirit of the area, but also goes hand-in-hand with the Trust’s regenerative work across the only quarter in London remaining from the late 17thcentury with its unique street layout. We’re delighted that Shaftesbury has chosen to celebrate the Sundial Pillar’s 30thanniversary and the work of the Seven Dials Trust with this commemorative art installation.”

The four-month display of Rene Gonzalez’s At the Entrance of Seven Obscure Passages will coincide with the one-day event, Festival 30, being held by Seven Dials to mark the 30th anniversary of the landmark. The celebration will take place on Saturday 29 June from 11am – 6pm across the seven interconnecting streets, with pedestrian-only access to live entertainment, music, food, theatre, arts and crafts.

On the day, curators of the anticipated Seven Dials Market, Kerb, will also bring its hand-picked street food traders to Shorts Garden, giving visitors an exclusive taste of what’s to come ahead of the market’s official opening in September.

At the Entrance of Seven Obscure Passages will be displayed in Shorts Garden until September 2019, then donated to the Seven Dials Trust in conjunction with the 30thanniversary celebrations and as a contribution to their ongoing fundraising efforts.